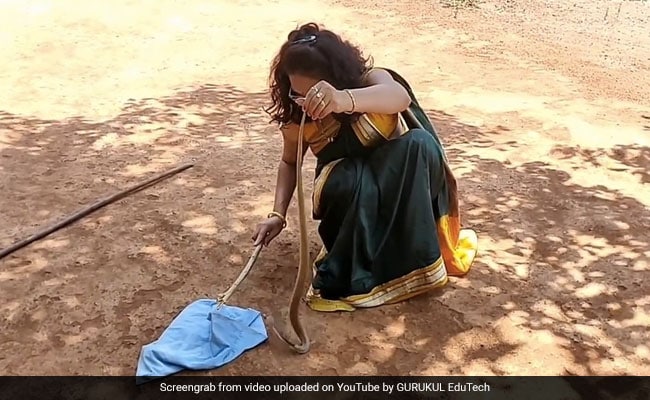 Latest: Watch The Viral Video That Has Internet Amazed

Nirzara Chitti captured a cobra while dressed in a saree for a function.

A woman, dressed in a saree, was filmed capturing a snake in a video that has made jaws drop on social media. Identified as Nirzara Chitti, a snake rescuer based in Karnataka, the woman was seen calmly picking the snake up with her bare hands as people around her watched and filmed the scene.

The video of the unique cobra snake rescue was filmed last year. It began to gain attention again after it surfaced on Twitter three days ago. The clip, less than two minutes long, shows Ms Chitti dressed in a saree – not the most comfortable of garments for any kind of strenuous activity, least of all snake catching.

In the video, Ms Chitti was seen using a stick to lure the venomous snake out from behind a cupboard and then picking it up. She was also heard saying that she was dressed for a function and could not change before coming. “Lekin mujhe saree ki vajah se ye handle karne ko nahi ho raha,” she says, explaining that her outfit made snake-catching more difficult.

The Twitter user who shared the clip initially identified the snake catcher as Virat Bhagini. She later clarified that the video actually featured Nirzara Chitti. “Virat Bhagini, a snake catcher, was dressed to attend a wedding when she was called to catch a snake in a home. She did it without any special equipment with perfect poise in a saree,” she wrote and later added, “A friend just informed me that her name is Nirzara Chitti.”

Virat Bhagini, a snake catcher, was dressed to attend a wedding when she was called to catch a snake in a home. She did it without any special equipment with perfect poise in a saree. pic.twitter.com/uSQEhtqIbA

The video has garnered 4.5 lakh views on Twitter and many more on Reddit. Many social media users dropped impressed comments, while others praised the snake catcher.

Hats off to her poise while she caught the snake….. Its time to institute some special awards for her ilk who help preserve wildlife rather than indulging in destruction!!

The snake rescue took place in April last year. Ms Chitti and her husband, Anand Chitti, had shared a video of the rescue on their YouTube channel. “Nirzara had to attend a marriage function but in between she had a rescue call so she immediately went for the rescue and rescued this cobra,” they wrote, identifying the snake as an Indian spectacled cobra.