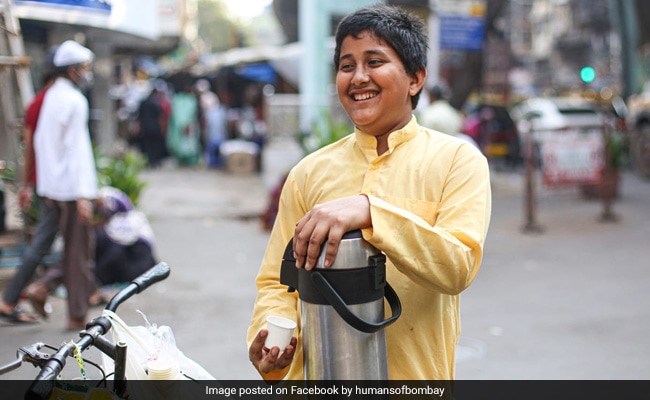 Latest: Offers Of Help Pour In For Mumbai Boy Forced To Drop Out Of School Amid Pandemic

He had to drop out of school amid the pandemic – now sells tea to earn a living.

Offers of help have poured in for a Mumbai boy who was forced to drop out of school amid the coronavirus pandemic. The schoolboy’s story was shared on social media by the popular page ‘Humans of Bombay’ and has touched thousands who read about his resilience in the face of tough circumstances.

In his interview to Humans of Bombay, the unnamed boy revealed that his mother became the sole breadwinner in their family after his father died suddenly of a heart attack.

“She would work odd hours and never took any offs because she wanted to provide for us. She gracefully took on Abbu’s role as well and never let me or my sisters feel his absence,” he said.

Strict about his studies, she once sat her son down after he nearly failed Geography and told him that only education would help him pave the way to a better future.

“She told me that she wants to see me join the AirForce as a Fighter Pilot. Seeing that glee of hope in her eyes, I made that dream my own and started studying very hard. My grades improved and my attendance became 100%,” said the young boy.

Unfortunately, the coronavirus pandemic – which affected thousands of small businesses and put a number of daily wage earners out of work – also affected this family. The young boy’s mother lost her job, and they couldn’t afford to send him to school after that.

“One month into the lockdown, we had no money at all, even my piggybank was empty,” he said.

The boy started working at a kirana store, earning 100 rupees a day – not much, he says, but “at least we didn’t have to go to bed hungry.”

A few months later, he decided to start selling tea in the lanes of Nagpada.

“Paranthe waale uncle was kind enough to give me a corner. I make my tea at his stall and then bring it across the street to serve the shop owners,” the boy says, adding that everyone is nice to him – but his mother blames herself.

“I don’t understand why-all these years she’s the one who taught us to put family first, so why is it wrong when I’m doing it? Maybe she’s worried that I won’t become a Fighter Pilot. But I promise you Didi, I will go back to school,” he concludes.

In the comments section, Humans of Bombay revealed that the boy sits near Sheek Paratha Shop, Nagpada, in Mumbai’s Bhendi Bazaar.

The story has touched hearts on social media, and several people have promised to help the boy.

“Great..will visit him either today or tomorrow for sure, such a hard working and inspiring boy,” wrote one Facebook user.

“The person(s) who can go meet this boy- thank you so much, and can you please set up an online donation page where we can all contribute? Or share his bank account details?” another said.