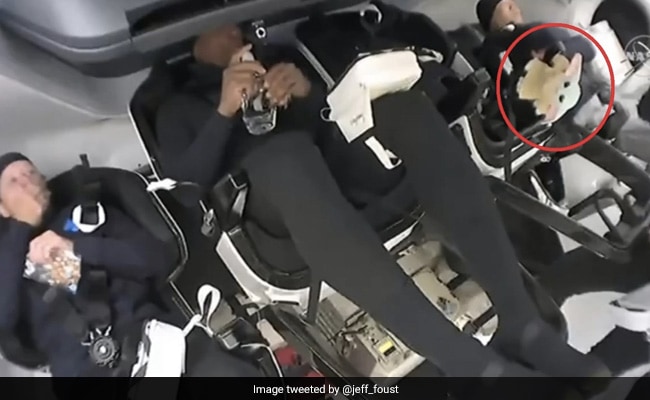 SpaceX’s newly-launched capsule with four astronauts arrived Monday at the International Space Station, their new home until spring. And with them travelled Baby Yoda – the creature from The Mandalorian who won hearts with his cuteness. A Baby Yoda plush toy was sent into space along with four astronauts on SpaceX’s second-ever crewed flight.

On May 31, Elon Musk’s SpaceX had become the first commercial company to launch a rocket carrying humans into orbit

Footage of Baby Yoda bouncing alongside the four astronauts – Michael Hopkins, Victor Glover, Shannon Walker and Soichi Noguchi – is winning hearts on social media. The toy can be seen in a live-stream from inside SpaceX’s Crew Dragon.

Views inside the Crew Dragon Resilience spacecraft reveal a “Baby Yoda” toy joined the astronauts on the launch as their zero G indicator.https://t.co/baLJVLCH0Tpic.twitter.com/wNBNcOCo1m

Footage of the adorable toy has gone viral on social media, with thousands of people gushing over it.

BREAKING NEWS: Baby Yoda is now in the International Space Station. He floated his way on. pic.twitter.com/inUCxtCkuI

This isn’t the first time that astronauts have brought stuffed toys with them to space . These toys are often used as gravity indicators.

In May, NASA astronauts Doug Hurley and Robert Behnken entered the International Space Station on SpaceX’s two-stage Falcon 9 rocket, carrying with them a shiny, stuffed dinosaur plush toy. When these toys start floating, it indicates that the astronauts have reached zero gravity.

Michael Hopkins and his crew – Victor Glover, Shannon Walker and Japan’s Soichi Noguchi – join two Russians and one American who flew to the space station last month from Kazakhstan.

The three Americans and one Japanese astronaut will remain at the orbiting lab until their replacements arrive on another Dragon in April. And so it will go, with SpaceX – and eventually Boeing – transporting astronauts to and from the station for NASA.