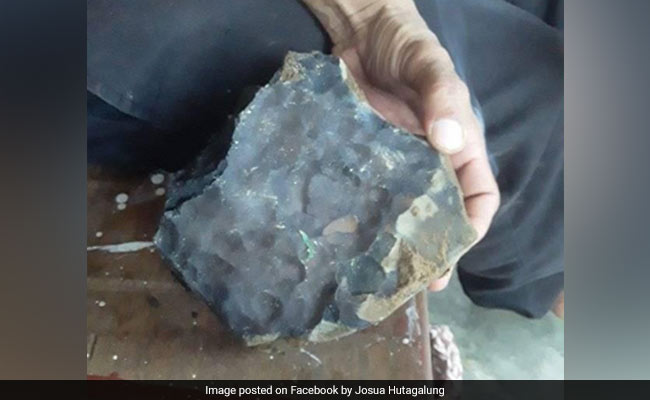 Josua Hutagalung has sold the meteorite for over a million pounds.

An Indonesian man became a millionaire overnight after a meteor crashed through his roof. Josua Hutagalung, 33, is a coffin maker from Sumatra who became astronomically richer after he recently sold the meteorite for over 1 million pounds – or roughly Rs 9.8 crore.

Mr Hutagalung was working outside his home in August when the 2.1 kg space rock smashed through the tin roof in his veranda.

“The sound was so loud that parts of the house were shaking too. And after I searched, I saw that the tin roof of the house had broken,” he told news outlet Kompas at the time. “When I lifted it, the stone was still warm.”

He shared photos of the meteorite on Facebook, where they created a flurry of interest.

According to the Independent, the meteorite is carbonaceous chondrite – an extremely rare variety estimated to be 4.5 billion years old. It is reportedly worth around 645 pounds (approximately Rs 63,000) per gram.

Josua Hutagalung has now sold the rock to a specialist collector – Jared Collins of the USA. Mr Collins has reportedly re-sold it to fellow collector Jay Piatek, who has stored in liquid nitrogen at the Centre for Meteorite Studies at Arizona State University.

Mr Hutagalung did not disclose the exact amount he was paid for the rare rock, which has magnetic properties. However, he indicated that the amount was over 1 million pounds.

With the money he has received – estimated to be equivalent to 30 years worth of his salary – he plans to retire and build a new church in his village.