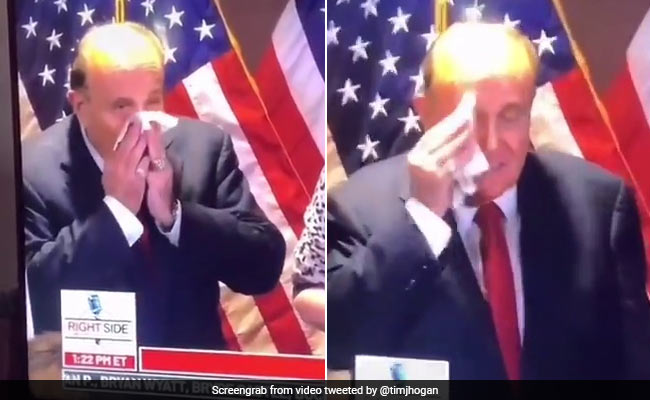 Latest: Rudy Giuliani’s Dripping Hair Dye Video Is Not The Only One Going Viral

Dripping hair dye was not the only strange thing to happen at Rudy Giuliani’s decidedly bizarre press briefing. US President Donald Trump’s lawyer was also filmed blowing his nose into a napkin, folding it outwards and using it to wipe his face in a video that is going viral on social media.

Rudy Giuliani, along with several Trump Campaign legal advisers, held a press conference on Thursday to allege large-scale voter fraud in the 2020 US Presidential Election.

While he alleged mass, coordinated voter fraud during the press conference, the show was stolen by his dripping hair dye. As Mr Giuliani stood at the lectern and sweated in front of journalists, streaks of what appeared to be black hair dye began to run down his face. Of course, the Internet was quick to notice this, and jokes began to flow thick and fast.

Incredibly enough, the hair malfunction wasn’t the only bizarre thing that set Rudy Giuliani trending online. In another video, which has spread quickly on social media, he was seen blowing his nose into a napkin in the age of coronavirus while standing just behind attorney Sidney Powell. Then, folding the napkin outwards, he proceeded to wipe his lips and forehead with it.

oh my god I missed this pic.twitter.com/OGFzvC80Fy

The bizarre scene has been viewed over 1.5 million times on Twitter, and the reactions ranged from horrified to disgusted to disbelieving.

During the surreal press conference, the attorney also acted out a scene from My Cousin Vinny. The performance was lambasted by social media critics.

Giuliani’s reenacts a scene from “My Cousin Vinny” and then casually accuses Biden of crimes. Unhinged. pic.twitter.com/3RKJeX8cWs

Since American mainstream media called the election in favour of Democrat Joe Biden, Mr Trump and his legal team has been claiming, without evidence, that the election was stolen. Mr Giuliani earlier appeared in Pennsylvania court, where his claims of massive voter fraud fell flat.