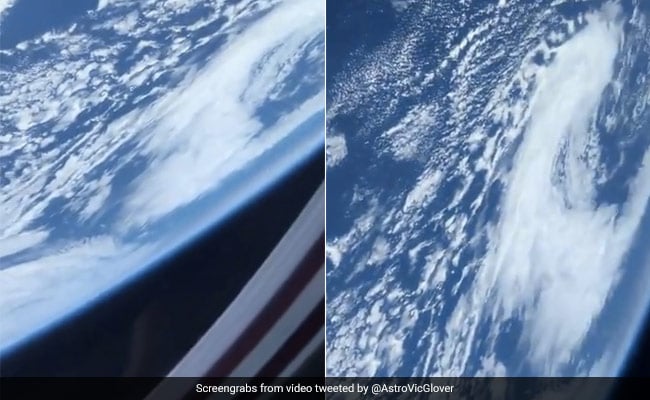 A glimpse of the Blue Planet from space.

NASA astronaut Victor Glover, who recently travelled to the International Space Station, took to Twitter on Wednesday to share a breathtaking view of the Earth from space. His first video from space offers a stunning view of the Blue Planet and, according to the astronaut, it doesn’t do justice to the real thing.

“The video just doesn’t do it justice – It is pretty amazing though,” Mr Glover says in video as he points the camera towards Earth.

“My first video from space!” he wrote while sharing the clip on Twitter. “Looking at the Earth through the window of Dragon Resilience. The scale of detail and sensory inputs made this a breathtaking perspective!”

My first video from space! Looking at the Earth through the window of Dragon Resilience. The scale of detail and sensory inputs made this a breathtaking perspective! pic.twitter.com/n7b5x0XLIp

The video has been viewed nearly 2 million times on the microblogging platform, collecting over 1 lakh ‘likes’ and thousands of amazed comments.

“I don’t know how you all get work done up there. I would just be staring out that window all the time,” one person said, while another remarked: “Stunning! It makes me so happy that you are finally in space witnessing such beauty!”

Victor Glover, 43, is one of the four astronauts who entered the ISS after a 27-hour, completely automated flight from NASA’s Kennedy Space Center last week. Part of the SpaceX Crew-1 mission, they were welcomed to the space station by NASA astronaut Kate Rubins and Russian cosmonauts Sergey Ryzhikov and Sergey Kud-Sverchkov.

According to CNN, Mr Glover had spoken about his experience of viewing the Earth from space in a news conference from the ISS. “I’ve seen a ton of pictures, but when I first looked out the window at Earth, I had no words. It was an amazing, once-in-a-lifetime feeling,” he said.

Latest: Could Kamala Harris Wear A Saree On Inauguration Day? Here’s What The Internet Thinks