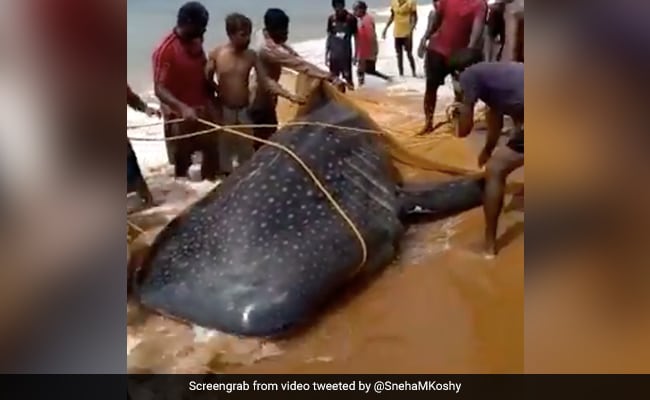 Kerala: Some 60 men tore open fishing net within minutes to free the whale shark and released it in sea.

In a rare sight, around 60 fishermen in Kerala’s Thiruvananthapuram on Friday released an endangered Whale Shark back into the sea after it got caught in their net.

With a cyclone warning, the fishermen could not venture out into the deep sea and some were fishing near the coast. It was during this time that a giant Whale Shark got caught in their net, and was eventually released into the sea.

“There were around 60 fishermen who made a lot of effort to free the Whale Shark. Initially, they thought the shark would not be able to swim back, but after two efforts the Whale Shark made its way into the sea. When I reached the spot, the shark had started swimming back. It was a very special moment for all of us who witnessed it,” Ajith Shanghmukham, who shared the video on social media. told NDTV.

Minutes before the endangered whale shark’s swim to freedom. A group of fishermen in kerala helping the shark, that was caught in their net, back to the waters. Video courtesy: Ajith Shanghmukham. Friday was a Cyclone alert, so they did not venture into the deep. pic.twitter.com/QVTslY5ep7

The giant shark was freed within a matter of minutes after it was caught, Mr Ajith said, adding that all the 60 fishermen worked together to tear their net open.

According to Mr Ajith, the endangered shark – among the largest in the world – must have weighed around 1,000 kg. Such an incident had happened earlier also, around 2 km away from Shanghumukham beach in Thiruvananthapuram.

“The Whale Shark is an endangered species. We have spoken to the fishermen and have congratulated them on their gesture. The forest department will also be rewarding them to appreciate and encourage them to rescue animals that get stuck in their nets,” Range Officer Shaji Jose told NDTV.