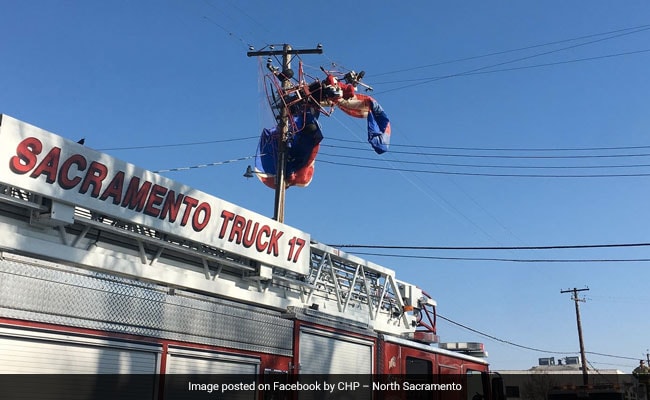 A man dressed as Santa got tangled in power lines after a parachuting mishap.

A man dressed as Santa Claus had to be rescued from power lines after his aircraft crashed in California. According to People Magazine, the man had been using a motorized personal aircraft to deliver candy to children in a suburb of Sacramento when his aircraft crashed.

Photos shared on social media show him tangled in live wires high above the ground after the incident on Sunday morning.

The California Highway Patrol’s North Sacramento division arrived to the man’s rescue, writing in a Facebook post: “Turns out Santa was trying to get some last-minute fun in before the holiday and got into a hot wire situation.”

The man was later helped down by the Sacramento Fire Department. Luckily, he did not suffer any injuries in the accident.

The fire department also shared a video of the rescue. Take a look at the rescue operation below:

Through teamwork with @SacFirePIO & @SMUDUpdates the person was successfully rescued from the aircraft into power lines in #RioLindapic.twitter.com/UmxNRwrJJV

The fire department said that the man had been flying a “hyper light” aircraft and not a glider, as previously reported. According to news channel KCRA, the Federal Aviation Administration (FAA) identified his aircraft as a powered parachute.

“A powered parachute lost power on takeoff near a school in Rio Linda, Calif., and then hit and became suspended in power lines around 11:00 a.m. local time (Sunday),” said a spokesperson with the FAA.

Chris Vestal of the fire department confirmed that power for about 200 people in the Rio Linda area was shut off during the rescue operation. “He was trying to deliver candy canes to kids that were playing through in the community. We commend him for that,” he said.