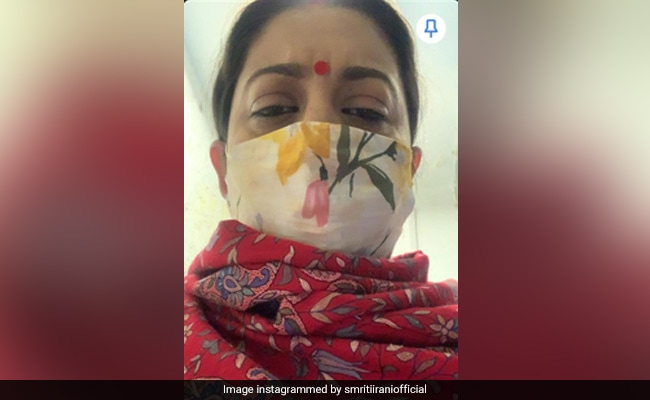 Union Minister Smriti Irani has spoken up about an issue that many working mothers will relate to – the problems of balancing personal and professional lives in a pandemic which has many people working from home. Smriti Irani, who has two children with husband Zubin Irani, took to Instagram this afternoon to share a selfie featuring her “#JaanLeLoMeri look”.

With her brows furrowed and a mask drawn up to her nose, she looks annoyed in the picture. The reason for her expression is revealed in the caption: It’s the look she gets when virtual work meetings are interrupted by her children yelling for her.

“The #jaanlelomeri look – when you balance #onthegoonlinemeetings with battle cries of ‘mummmmaaaa…’,” Ms Irani, 44, wrote while sharing the pic. She also added the hashtag #WorkingMoms.

Her Instagram post collected over 4,000 ‘likes’ within minutes of being shared, along with several comments from working moms who could relate very well to it.

“Every mother’s story,” wrote one Instagram user in the comments section.

“I hear you,” another said, while a third added, “I agree with this look.”

Ms Irani regularly shares family photos on Instagram. Last week, she had posted a picture of daughter Zoish and son Zohr smiling for the camera along with their father.

Before that, Zoish, Zohr and Shanelle – Zubin Irani’s daughter from his previous marriage – had featured on Ms Irani’s Instagram in a post where she encouraged her followers to mask up before leaving the house.

Smriti Irani had tested positive for coronavirus in October.