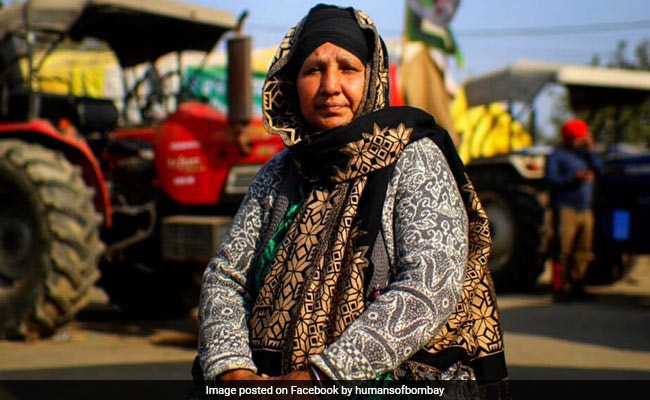 Latest: A Woman Farmer On Why She Is Protesting At Delhi Border

Sarabjeet has been protesting at Singhu Border against the centre’s farm laws.

“We don’t want to fight, we just want to be heard,” says Sarabjeet, a woman farmer protesting against the centre’s agricultural laws at Delhi’s Singhu Border area. Farmers have been protesting at the borders of Delhi since November 26 against the three recent farm laws of the centre. Today, as Kisan Diwas or National Farmers’ Day is being observed across the country, ‘Humans of Bombay’ spoke to Sarabjeet about the protests against the farm laws and more.

“I’ve dedicated my whole life to kheti (farming),” she says. The only girl among four children, she says she was raised like a boy by her father – who insisted that she accompany him to their farms rather than cooking at home.

Her love for farming was such that when she married, she set the condition that she would continue working. The money she made with every year’s crops contributed to running the household.

“I did everything – from sowing the seeds to cultivating the harvest,” says Sarabjeet, opening up about the struggles that farmers face. “Sometimes it rains, sometimes pests destroy our crops, but we continue to toil.”

However, she says, “when the farm bills were passed without taking us, the farmers, into consideration, I wasn’t going to sit at home and do nothing.”

She insisted on being part of the protests against the laws taking place in Delhi. Despite her son’s reservations, Sarabjeet arrived at the Singhu Border a week after the protests began.

Speaking about the protest site, she says that every evening, farmers come together to sing Punjabi folk songs. On Gurupurab, even the police joined their celebrations.

And if making sure their voice is heard means sitting in the biting cold of Delhi that makes breathing hard, Sarabjeet says she is ready for it. “We barely earn, but we fill your plates with food everyday. I understand that money is important; everyone wants to earn it. But beta, money doesn’t satiate your hunger, our grains do.”

“I won’t leave until we’re heard, until we win,” she says.

Humans of Bombay’s Facebook post documenting their interview with Sarabjeet has been shared over 200 times in two hours.

“Thank you for your determination! We will forever be indebted for your sacrifices for us,” wrote one person in the comments section.

“Thank you for sharing this story,” said another.

Kisan Diwas is observed every year on December 23 to honour Chaudhary Charan Singh on his birth anniversary. The farmer leader is remembered for his commitment to the millions of peasants of India. During his short time as prime minister — July 1979 to January 1980 — Chaudhary Charan Singh worked hard for Indian farmers, introducing several welfare schemes.