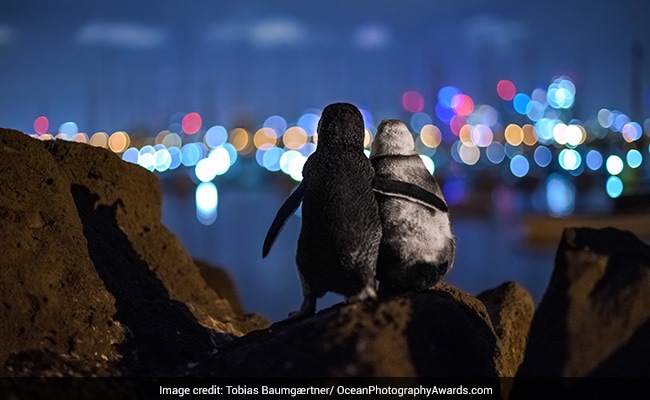 Two fairy penguins comfort each other near Melbourne.

A photograph of two penguins appearing to comfort each other has won big at a photography contest. In a year that has produced many poignant and heartbreaking images, the photograph of the two penguins received an outpouring of love on social media and went massively viral earlier this year.

It has now been picked as one of the winners in Oceanographic magazine’s Ocean Photography Awards.

The picture – which won the magazine’s Community Choice Award – was taken by Tobias Baumgaertner in Australia’s St Kilda Pier in Melbourne. He was told that the penguins had both lost their partners and regularly met to comfort each other.

“These two fairy penguins poised upon a rock overlooking the Melbourne skyline were standing there for hours, flipper in flipper, watching the sparkling lights of the skyline and ocean,” the German photographer wrote on Instagram in March.

“A volunteer approached me and told me that the white one was an elderly lady who had lost her partner and apparently so did the younger male to the left.

“Since then they meet regularly comforting each other and standing together for hours watching the dancing lights of the nearby city.”

The photograph was widely circulated online as the world looked for a glimmer of hope and joy amid the coronavirus pandemic.

“I posted this image of these two Fairy penguins a little more than half a year ago and since then it has circled the globe, it has been seen by millions and I have received thousands of messages and comments of how these two little guys have touched and mended broken hearts, brought joy, hope and love into your lives,” Mr Baumgaertner wrote in an update shared last month.

St Kilda Pier in Melbourne is home to around 1,400 fairy penguins. Fairy penguins are the world’s smallest species of penguins, found on the coastlines of southern Australia and New Zealand.