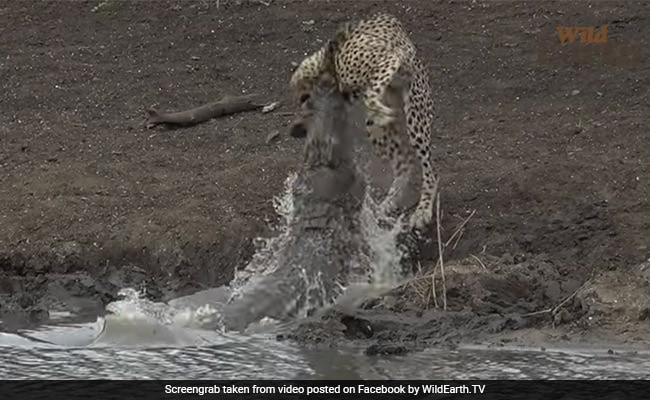 A Nile crocodile was filmed dragging a young cheetah into water.

Horrifying footage shows the moment a cheetah is dragged into water by a 13-foot crocodile in South Africa. The video was captured by South African WildEarth safari guide Busani Mtshali at the &Beyond Phinda Private Game Reserve, reports the Daily Mail.

The young cheetah had wandered to the watering hole for a drink, unaware of the Nile crocodile lurking inside it. As the cheetah lapped up water, the crocodile emerged in a flash and dragged it underneath. Footage shows the crocodile leaping out of water to grab the cheetah cub in its powerful jaws before pulling the struggling animal into the water.

“It is so painful,” the guide can be heard saying, in the video, according to The Sun. “It is more than the word painful. There is nothing really we can do because the croc was just ambushing the cheetah when the young cheetah cub went down to drink water.”

“On a live safari for WildEarth, &Beyond Phinda guide, Busani Mtshali, came across a mother cheetah with two cubs,” wrote WildEarth.TV on Facebook while sharing the footage. “As the male cub approached the waterhole to quench his thirst, Busani noticed a crocodile was lurking in the water nearby. What followed was sad and hard to watch.”

While we would prefer scenes like this to have happier endings, every animal has its role to play in the ‘circle of life’, even the crocodile,” they added.

The video has gone massively viral on social media, racking up millions of views across different platforms.

Nile crocodiles are the largest crocodile species of Africa. They are considered to be a very aggressive species of crocodile with an extremely powerful bite.