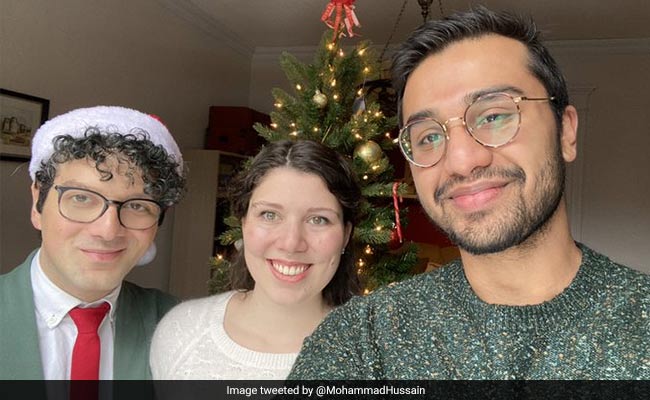 Mohammad Hussain with his two roommates.

Christmas – the festival of mistletoe and wine, warmth and good cheer… but also a time for frenzied gift-shopping and last minute running around and extensive meal prepping. To the causal observer, Christmas may seem like a time for relaxing, eating good food and exchanging gifts with friends and family. But as a viral Twitter thread from a man celebrating Christmas for the first time reveals, there’s a lot more to this festival than gifts and good food.

Mohammad Hussain is a Muslim man whose observations about the holiday have struck a chord with thousands across the world.

Mr Hussain, who lives in Canada, decided to celebrate the holiday with his roommates after they were not able to travel home due to Covid restrictions.

“I just wanted to get involved and help them out,” he said to BBC. “I couldn’t help but notice they were much, much better at it than I was. The example I come to is we were doing the garland around the staircase and I was really struggling, and my roommate was going at the speed of light.”

The 25-year-old listed out some of his other observations on Christmas in a Twitter thread that quickly went viral on the microblogging platform.

“From the outside looking in, Christmas always seemed pretty simple. I always thought you put up a tree and then gave gifts to family. This is a lie,” he wrote as part of Observation 1.

Observation 1: Christmas is a part time job that you have from mid-November to the end of December.

From the outside looking in, Christmas always seemed pretty simple. I always thought you put up a tree and then gave gifts to family. This is a lie.

Among his eight other observations, he included “Every free moment you have will be spent agonizing over the gifts you must buy”, “Your gift budget does not matter” and that Christmas tree ornaments are expensive.

That cost me $15.99. That’s more than three everything bagels. I am furious. For what it cost, you best believe that I am insisting that it be passed on to my great grandchildren. If they break it I will haunt them.

The thread even caught the eye of Canada Prime Minister Justin Trudeau, who agreed that it was spot-on.

Yeah, that about sums it up… thanks for sharing what you’ve learned so far. Sophie and I are sending you and your roommates our best wishes this Christmas, and we’re glad to hear you’re enjoying it all so far!

Mohammad Hussain and his roommates are planning to spend Christmas by opening their presents, playing board games and cooking and eating a 12-course dinner.