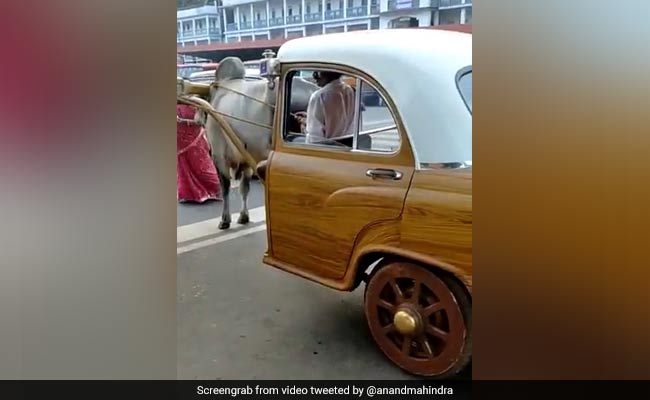 Elon Musk’s Tesla is today the world’s most valuable automaker – but industrialist Anand Mahindra has found a desi vehicle that could give the American electric car company a run for its money. Tesla’s innovative, all-electric cars have been praised for the being more eco-friendly than vehicles that run on gasoline. One of the biggest advantages of owning an electric car is the lack of harmful exhaust emissions, but on the flip side, Tesla cars are relatively expensive to buy.

Well, this desi alternative is low cost and fuelled by renewable energy – although emissions may be a problem here.

On Wednesday evening, Anand Mahindra tweeted a clip of the ‘car’ in question. “I don’t think @elonmusk & Tesla can match the low cost of this renewable energy-fuelled car,” he wrote while sharing the video, which shows a fancy bullock cart constructed to resemble a car.

Footage tweeted by Mr Mahindra shows the body of a car being pulled by cattle. The Chairman of Mahindra Group admitted that Tesla might still have the upper hand when it came to harmful emissions. “Not sure about the emissions level, though, if you take methane into account…” he wrote.

I don’t think @elonmusk & Tesla can match the low cost of this renewable energy-fuelled car. Not sure about the emissions level, though, if you take methane into account… pic.twitter.com/C7QzbEOGys

The video has been viewed over 2.9 lakh times on the microblogging, where it has also collected over 23,000 ‘likes’ and hundreds of amused reactions.

The exhaust position could be improved.

In built “horn” too.

What do you think of this low cost vehicle? Let us know using the comments section.