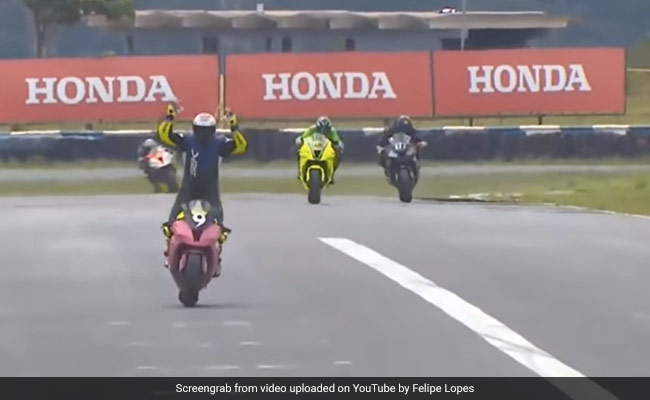 Andre Verissimo took his hands off the throttle to celebrate his victory a bit prematurely.

A superbike racer in Brazil was left mortified after he began celebrating prematurely and ended up finishing in third place instead of first. Andre Verissimo was all set to cinch the first place at the Autodromo Internacional Ayrton Senna in the city of Goiana, reports Ladbible, when he turned around to see his two closest competitors way behind him.

After a glance over his shoulder at the final bend, he took his hands off the throttle to celebrate his victory.

Unfortunately, he did it too soon.

Mr Verissimo failed to spot his opponents Osvaldo Filho and Marcelo Skaf covering the distance between them. As he celebrated, they zoomed ahead in the final seconds of the Superbike Brazil race. Mr Verissimo was filmed trying to regain lost ground by sitting down again and accelerating – but in vain. He ended up finishing third, thanks to his error.

“I tried to accelerate, but (the bike) was in third gear – really slow,” he explained, according to Sky News. “The motorcycle was dead and they passed me by.”

Footage of the incident has been widely circulated on social media, where the motoracer has become both a cautionary tale and the subject of several jokes.

The blunder occurred on the eighth and last race of the championship, and while Mr Verissimo lost the race, he was named the overall championship winner in the EVO category.

“At the end of the day, everyone went home happy,” he said.