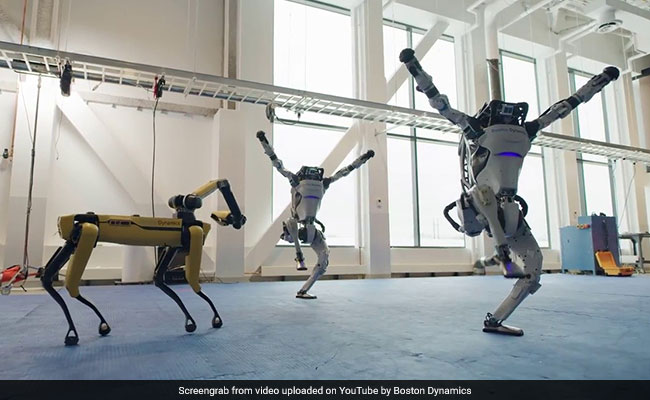 Latest: Boston Dynamics Got Its Robots Together For A New Year Dance

Boston Dynamics dance to ‘Do You Love Me’ by The Contours.

This is a dance routine the likes of which you probably haven’t seen before. Boston Dynamics recently got its robots together for a dance to celebrate the arrival of 2021. The American engineering and robotics design company released a fun video of its robots performing a choreographed dance routine to ‘Do You Love Me’ by The Contours.

The two minute and 53 second clip features Atlas the humanoid robot and Spot the robot dog. Also joining them towards the end is Handle – a robot designed to move boxes but one that also packs some surprising dance moves.

The video shows the crew of bots juggling, shaking and bending to the beats of the song in a performance that’s sure to wow. The video has gone massively viral online since being shared a day ago. “Our whole crew got together to celebrate the start of what we hope will be a happier year: Happy New Year from all of us at Boston Dynamics,” the company wrote while sharing the video on YouTube.

Check out Boston Dynamic’s ATLAS robots dancing to The Contours – “Do You Love Me”.

On Twitter, the robot dance has been viewed 1.1 million times and racked up thousands of ‘likes’ and comments.

It also caught the eye of Tesla and SpaceX CEO Elon Musk, who shared it on the microblogging platform.

This is not CGI https://t.co/VOivE97vPR

Recently, a Boston Dynamics robot had featured in another viral video. Spot the robot dog was filmed pulling a rickshaw for American special effects designer and television personality Adam Savage.