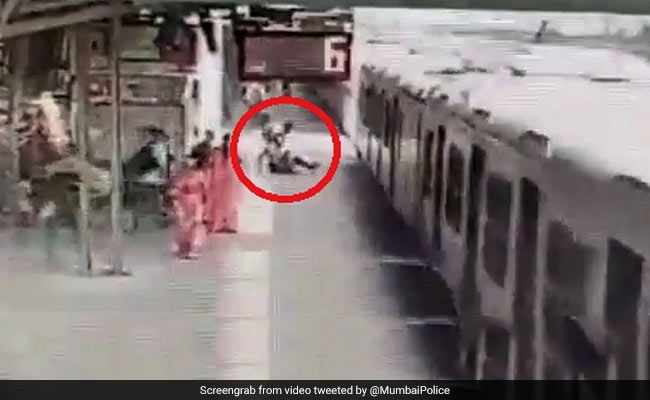 A police constable from Mumbai jumped into action to save a man who slipped while trying to board a moving train. CCTV footage from the railway station shows PC Yogesh Hiremath pulling the man to safety after he lost his balance and almost fell into the platform gap.

The incident took place at at Dahisar Railway Station on the Western line of the Mumbai Suburban Railway network.

In the video, the unnamed man was seen arriving at the platform after the train had already begun moving. As he tried to enter the boarding train, he slipped and lost his balance. The presence of the quick-thinking Mr Hiremath – who sprung into action to pull him out – prevented him from getting severely injured.

The alert officer managed to pull him out before anything untoward happened, Mumbai Police wrote on Twitter while sharing hair-raising footage of the close shave.

Your Safety Is In Good Hands!

PC Yogesh Hiremath was at Dahisar Railway Station when a young man almost fell in the platform gap while trying to board a moving train.

The alert officer managed to pull him out before anything untoward happened.#MumbaiFirstpic.twitter.com/1qFToEmceE

The video has been viewed thousands of times on the microblogging platform, where many praised the cop.

This is the second such rescue by Mumbai Police this year. On January 1, a Mumbai Police constable a saved the life of a 60-year-old man who got stuck at a railway track. Footage of the incident, which also took place at Dahisar Railway Station, had gone viral on social media.

The video shows the cop helping the man up from the railway tracks in the nick of time.

#WATCH | Maharashtra: A constable of Mumbai Police helped a 60-year-old man, who got stuck at a railway track, save his life at Dahisar railway station in Mumbai yesterday. pic.twitter.com/lqzJYf09Cj

According to a 2019 report, about 80 lakh passengers travel on Mumbai’s suburban trains daily and, on an average, eight to nine commuters die everyday due to various mishaps.