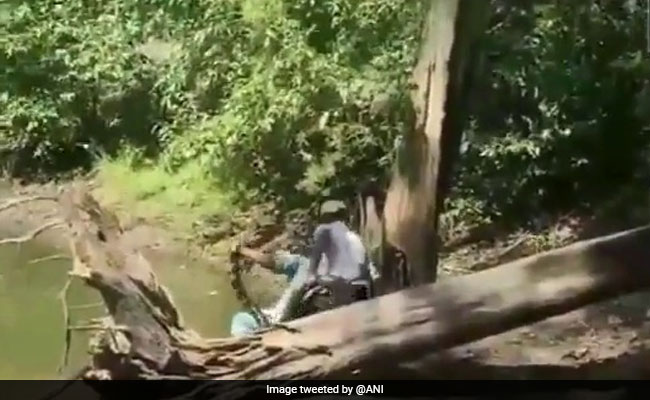 A snake catcher in Karnataka narrowly avoided being bitten by a king cobra.

A reptile expert had a narrow escape from a king cobra – the world’s longest venomous snake – while trying to capture it. Footage shared by news agency ANI on Twitter shows two snake catchers near a water body, trying to capture the huge serpent. The video was filmed in Karnataka’s Shivamogga.

In the hair-raising footage, one of the snake catchers manages to get a hold of the king cobra’s tail. However, the aggressive snake strikes back in an attack so surprising that the other snake catcher loses his balance and falls down. The two snake catchers were then seen scrambling to capture the king cobra before it could bite.

A bite from a king cobra can be fatal, as the snake’s venom quickly attacks the victim’s central nervous system.

Since being shared on Twitter a day ago, footage of the snake catcher’s narrow escape has been viewed over 1 lakh times.

“An apt heading should have been ‘A snake rescuer had to be rescued while trying to rescue a snake’,” wrote one person in the comments section.

“Applaud their bravery and effort, they didn’t panic much, else could have been absolutely fatal. Salute to the experts,” said another.