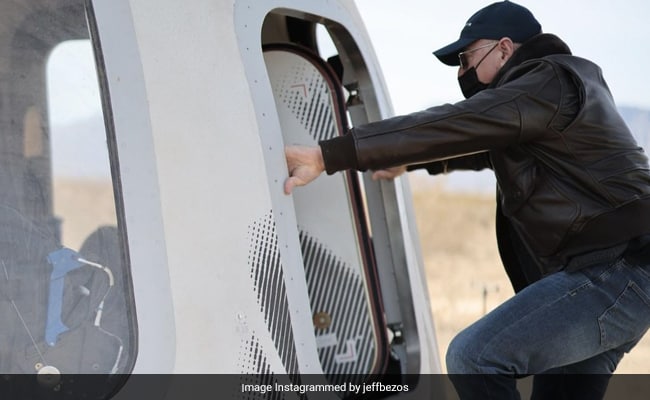 Billionaire Jeff Bezos, 57, has shared a photograph which shows him in his famous lucky boots. These boots are his footwear of choice every time Blue Origin – his human spaceflight startup – launches a space vehicle. Blue Origin launched and landed the fourteenth test flight of its New Shepard rocket booster and capsule on Thursday, reports CNBC.

Jeff Bezos, who was recently dethroned as the world’s richest person by Elon Musk, has spoken about his lucky boots in the past. During a chat with Shah Rukh Khan and Zoya Akhtar last year, he revealed he is a little superstitious and said, “I have a pair of lucky boots and… these are Texas cowboy boots. I wear them. They’re giant… very flashy.”

This morning, he took to Instagram to share a picture which shows him wearing these lucky boots while stepping inside the New Shepard space vehicle after a “picture perfect landing”. Mr Bezos also revealed that he stamped and verified student postcards from around the world that were sent to space as part of Blue Origin’s non-profit ‘Club for Future’.

The initiative to launch postcards into space on a Blue Origin New Shepard rocket is designed to inspire students to pursue a career in STEM – Science, technology, engineering, and mathematics. The postcards are returned to the sender with a ‘Flown to Space’ stamp.

The Instagram post has registered over 1 lakh ‘likes’ and hundreds of comments since being posted a few hours ago.

According to a CNBC report, Blue Origin aims to carry the first passengers on its New Shepard space vehicle as early as April. However, responding to a Reuters request for comment on the report, a company spokesperson said “this is rumor and speculative – not confirmed.”