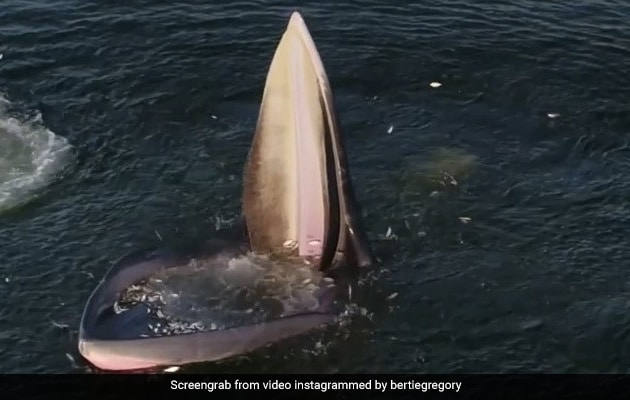 A video that has gone viral on social media shows an Eden’s whale’s unique feeding strategy. The drone footage, captured in the Gulf of Thailand, shows how the whale manages to trap fish in its mouth in behaviour that experts have called “extraordinary”.

According to the Smithsonian Museum’s educational website, Eden’s whales (currently the subspecies Balaenoptera edeni edeni) only live along the coast in Indo-Pacific waters and can grow up to 38 feet in length.

In this footage – part of an episode on the BBC documentary ‘A Perfect Planet’ – a huge Eden’s whale is seen treading water and keeping its mouth open to create a flow that pulls fish into its mouth. Posted online by wildlife filmmaker Bertie Gregory, the clip shows a number of fish disappearing into the whale’s mouth.

The video also made its way to other social media platforms, leaving millions on viewers stunned.

On Twitter, it has racked up nearly 4 million views.

According to Mr Gregory, while the video shows extraordinary behaviour from a whale, this behaviour developed out of the problem of ocean pollution.

“This extraordinary behaviour (where the whale treads water!) is thought to have developed because pollution has made the Gulf of Thailand a hypoxic environment,” he wrote.

Sewage flow into the ocean has depleted oxygen levels in water to the point where fish can only live on the surface.

“This means the whale’s fish prey can only live in this surface layer,” forcing it to tread water in order to eat.