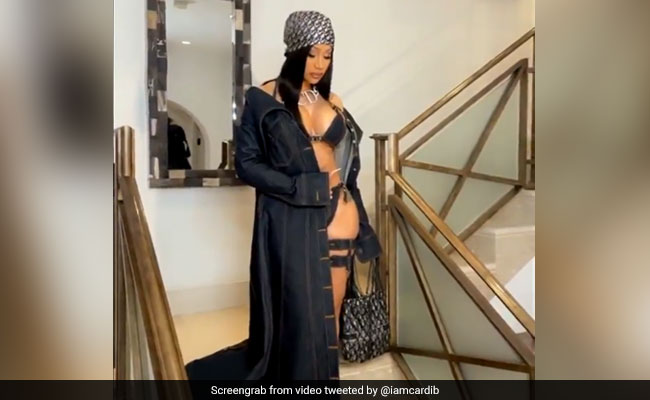 Cardi B shared a short clip teasing a bigger announcement.

Desi Twitter users were surprised and intrigued to hear a familiar tune playing in the background of American rapper Cardi B’s video recently. The 28-year-old created waves on social media Sunday when she released a short clip teasing a bigger announcement to come soon. In the clip, Cardi B appears on top of a staircase and says, “I got an announcement to make tomorrow — bye.”

The cryptic message instantly set Twitter abuzz with speculation. Some fans wondered if Cardi B was teasing the release of a new album, while others wagered that she would be unveiling a new single. However, the video grabbed eyeballs on desi Twitter for a completely different reason – Cardi B’s choice of background music.

Desi Twitter users were quick to notice that Kaliyon ka Chaman from the 1981 Bollywood movie Jyoti began playing as Cardi B descended the staircase in the 12-second video. The video has been viewed over 6 lakh times on Twitter.

I got a announcement to make tomorrow ???? pic.twitter.com/5pVtJShEgg

The use of a Bollywood song in the video by the American rapper and songwriter sent Twitter into a tizzy. Check out some of the reactions it garnered:

Omg an Indian song in the background pic.twitter.com/FAOUTITWzY

okay is that kaliyo ka chaman in the background?@?$#?$ https://t.co/AKzBSqZD6u

Born in New York City, Cardi B aka Belcalis Marlenis Almanzar gained popularity on Vine and Instagram. Her debut album, Invasion of Privacy, debuted at number one on the Billboard 200.