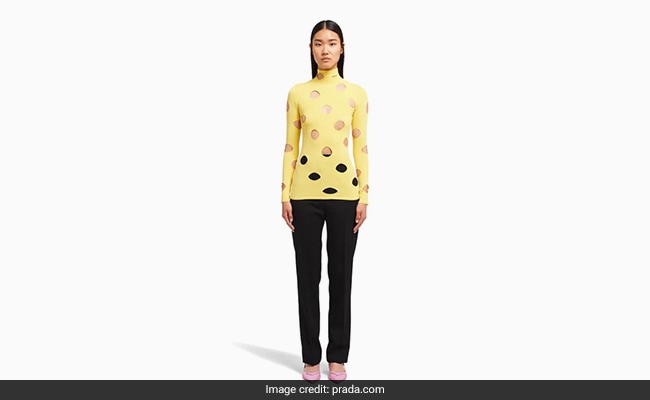 The fashion item that has got a section of the Internet talking is part of Prada’s Spring Summer/2021 collection. Named the “Openwork viscose turtleneck sweater”, it features large holes across the whole garment.

The yellow turtleneck has left social media users puzzled, with some pointing out that a sweater with massive cut-outs in it would do little to keep the wearer warm. Others were baffled by its uncanny resemblance to a slice of Swiss cheese – a cheese is known for its distinctive appearance with several holes.

The Prada sweater retails on their website for 905 pounds – or approximately Rs 90,000. Along with Sunny Yellow, Black and Milky White options are also available.

Ever since pics of the sweater surfaced on social media a few days ago, it has become a talking point among fashion enthusiasts, garnering amused as well as baffled reactions.

“The cheese looking sweater from Prada is making me so angry right now,” wrote one enraged Twitter user.

“Talk about ugly. Prada giving a bad name to cheese,” another declared.

This is not the first time that a clothing item has been mocked for its design. A few weeks ago, it was high street brand Zara’s “Knit Arm Warmers” that had attracted lighthearted trolling on social media.