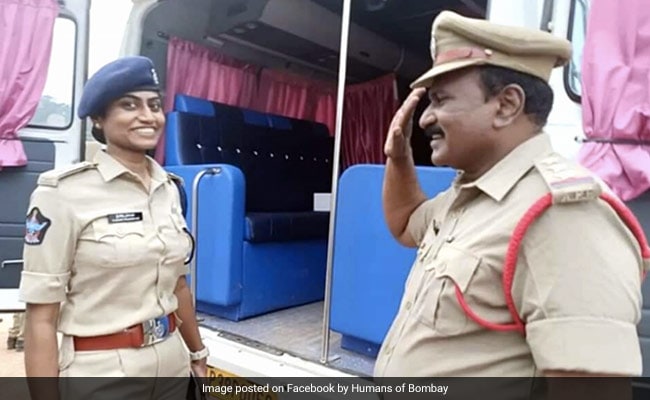 Earlier this year, a heartwarming picture of an Andhra Pradesh cop saluting his daughter, who is now appointed at an officer’s rank in the same department, went viral on social media. Now, Jessy Prasanthi, who also saluted her father, has opened up about the viral moment in an interview with Humans of Bombay.

“Dad’s always been my hero,” says Ms Prasanthi, who is currently posted as the Deputy Superintendent of Police (DSP) of Guntur district. Her father is Circle Inspector Y Shyam Sundar.

As a young child, Ms Prasanthi says she once accompanied her father for patrolling and saw people saluting him. Since that day, she began saluting him every morning too – but it was only when she grew older that she realised the risks her father took on a daily basis.

“He’s had countless sleepless nights and missed hundreds of meals for his duty,” she says, adding that her father never complained despite working from remote locations and dealing with erratic work hours.

“The feeling of doing right by others meant everything to him,” says Ms Prasanthi of her father.

“Over the years, his driving force became mine,” says the daughter. Jessy Prasanthi began preparing for the civil services exam and was selected in 2018. She joined as a DSP and, she says, the sight of her in a police uniform brought tears to her father’s eyes.

For Ms Prasanthi, however, the moment of true validation came when she was on duty with her father.

“I was the officer-in-charge. When he reached the location, I was already there, police-ing my way through the patrolling. I don’t know what it was; perhaps it was seeing me in action for the first time, but mid duty, he stood up and saluted me!” she says.

“And even though I’d been a police officer since a year by then, that was the day I actually believed it.”

A picture of the father saluting his daughter won hearts on social media. Andhra Pradesh Police also appreciated the father-daughter duo and tweeted the picture from the official police department handle.