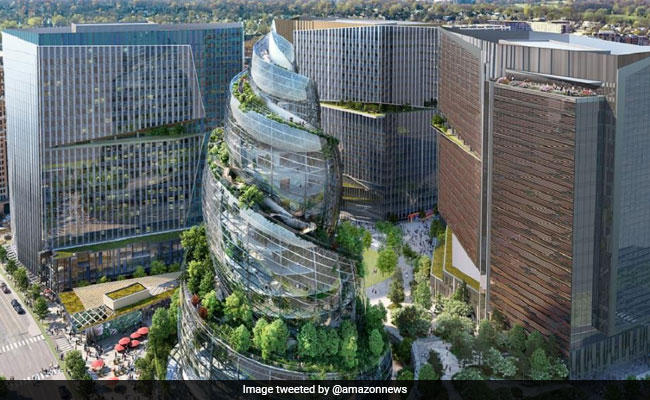 A sketch of The Helix at Amazon’s new headquarters shows a glass structure covered with trees.

Amazon has released plans for the next phase of its headquarters redevelopment in Virginia – and a double helix-shaped tower is all set to become the most striking feature of the campus. “Amazon unveils a proposed design for the second phase of its Arlington, Virginia headquarters,” the company said in a statement dated February 2, adding that construction at the site began last January.

Plans for an Amazon headquarters in Virginia were announced three years ago, when the American multinational technology company said it would be expanding beyond its Seattle headquarters.

Now, plans that were made public and submitted to authorities for approval on Tuesday have revealed that the second phase of redevelopment in Virginia will provide a further 2.8 million square feet of office space.

The centrepiece of the proposal is the eye-catching Helix tower – a glass structure that will be covered with trees native to the area. According to CNN, the 350-foot-tall tower aims to symbolise both nature and science.

A sketch of The Helix shows green trees spiralling around the structure which will be surrounded by three office buildings. Located in a campus that will “prioritize areas for collaboration, natural light, and a constant interaction with nature,” the Helix will provide Amazon employees with an “alternative work environment” and the opportunity to work amidst lush gardens and flourishing trees.

Amazon is excited to share the proposed design for the next phase of our Arlington headquarters. The Helix will be a spiraling vertical forest, connecting employees and the community with nature. ???????? Learn more: https://t.co/Bf7mHNkeompic.twitter.com/kIKHXmCMkJ

“A true double helix in shape and structure, this unique building will feature two walkable paths of landscaped terrain that will spiral up the outside of the building, featuring plantings you may find on a hike in the Blue Ridge Mountains of Virginia,” says Amazon. The company also plans to host an artist-in-residence program at The Helix.

Alongside The Helix, the Virginia headquarters will also have other sustainable buildings and office spaces distributed across three 22-storey buildings.

The buildings are designed to be LEED Platinum – the highest certification for a sustainable development issued by the US Green Building Council. Heating and cooling will run on renewable energy.

Amazon plans to offer public tours of The Helix on weekends. Other areas of the campus will also be accessible to the public.