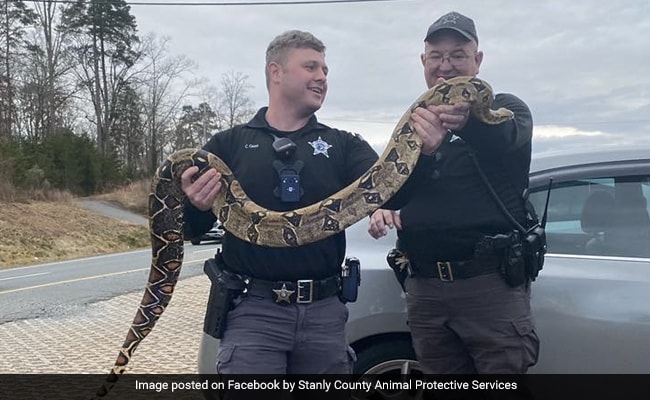 Latest: Boa Constrictor Slithers Out Of Container, Gets Stuck In Car Dashboard

The snake was removed by dismantling parts of the dashboard.

A pet boa constrictor snake in the US state of North Carolina had to be rescued from the dashboard of its owner’s car on Tuesday. Officers with the Stanly County Animal Protective Services were dispatched to the scene after receiving reports of a snake stuck in the dashboard of a car, where it had slithered during a trip to the vet’s, reports WXII.

Stanly County Animal Protective Services shared photos of the snake on Facebook, writing: “Our officers were dispatched out to a situation where a pet Boa Constrictor got himself stuck in the dashboard of his owners car. The snake was removed unharmed, and he is back at home!”

Parts of the dashboard had to be dismantled to allow the snake to slither out, according to The Charlotte Observer.

“What was the weight of that beauty?” asked one Facebook user, while another wondered how rescuers managed to get the snake out.

County worker Jamie Parker, who helped in the snake rescue operation, joked in the comments section that the team “just talked nice” to the snake and it backed itself out.

Stanly County Sheriff’s Office officials said that the boa constrictor escaped its container and went to the warmest part of the car while being taken to a veterinarian, getting stuck there. The snake’s owner said that it measures 8.5 feet and weighs about 18 kgs.

Boa constrictors are non-venomous but heavy-bodied snakes that live in tropical climates throughout most of Central and South America. They are known to swallow their prey whole and are frequently bred in captivity to be kept as exotic pets.