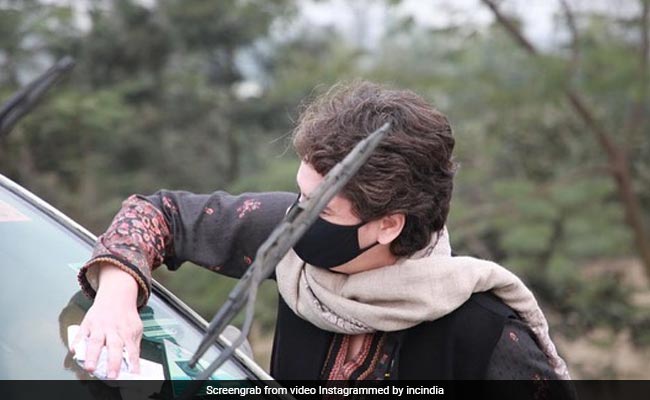 Congress leader Priyanka Gandhi Vadra was seen wiping her car’s windshield on the way to Rampur in Uttar Pradesh in a video shared by the party today. Her driver reportedly stopped the car due to poor visibility on the way to Rampur, where Ms Gandhi met the family of farmer Navreet Singh, who died on January 26 in Delhi, where he was participating in the farmers’ protest against the government’s new agriculture laws.

In footage shared on social media by the Congress, she was seen using a piece of cloth to wipe the car’s windshield as a number of people rushed up and offered to help her. Ms Gandhi’s convoy had to proceed with extra caution due to light rainfall which lowered visibility. Her driver had stopped the car to clean its windshield.

The video surfaced online alongside reports of three to four vehicles in Ms Gandhi’s convoy colliding with each other earlier today.

According to news agency PTI, vehicles in her convoy collided with each other on Hapur Road. No injuries were reported in the incident. The vehicles, including SUVs, were following Ms Vadra’s car, according to purported videos that have surfaced on social media.

The Congress, among other opposition parties including BJP’s former allies Shiromani Akali Dal and Shiv Sena, has lent its support to the farmers’ agitation.