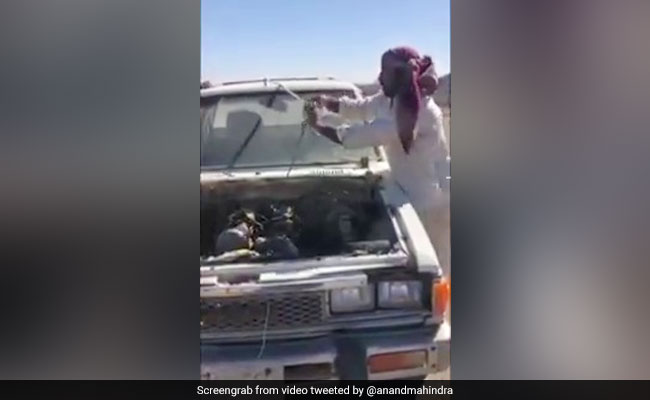 A video shared by businessman Anand Mahindra proves that a little ingenuity goes a long way. This afternoon, Mr Mahindra took to Twitter to share a clip which, he says, proves that jugaad is not just an Indian trait. Jugaad is a word that can be roughly translated to “a clever hack”. The Hindi word is essentially used to signify creativity in making the best out of scanty resources, and is celebrated as an example of the Indian spirit of resourcefulness.

The video begins by showing a man pushing the gas pedal of his car in vain. His vehicle remains stationary. Undeterred by this problem, the man comes up with an ingenious hack to continue his journey. He opens the car hood and uses a length of rope to create a makeshift accelerator cable of sorts, which allows his companion to accelerate the vehicle while he sits behind the wheel.

The video ends with the two men driving away, with one of them holding the rope to control the vehicle’s speed, not unlike a rider holding the reins of his horse.

“Looks like a dated video but hilarious nonetheless,” wrote Mr Mahindra while sharing the footage. “And you thought jugaad was an Indian trait! Now you know why we refer to the ‘horse’power of engines & refer to our cars as our chariots.

“PS Always keep the ‘reins’ in your hands,” he quipped.

Looks like a dated video but hilarious nonetheless. And you thought jugaad was an Indian trait! Now you know why we refer to the ‘horse’power of engines & refer to our cars as our chariots. (P.S Always keep the ‘reins’ in your hands… ????) pic.twitter.com/QasTWou2Vd

The video has been viewed over 31,000 times on Twitter and collected a ton of amused reactions.
Several people also shared personal anecdotes about similar hacks they have employed.

Something similar is done by auto drivers in Bangalore when the accelerator cable snaps. The remaining cable is tied to the body of the auto. Left hand used to change gears and right hand to cling to the cable. Right foot on accelerator.

Had done the same thing when my windshield wipers had failed me in the middle of a torrent ????

I had done this with my bike when the accelerator cable had snapped. Pulled the cable manually. 25 years ago.

It is a well known fact that Mr Mahindra appreciates examples of clever hacks or jugaad. The Chairman of Mahindra Group often gives a shout-out to ideas and videos that catch his eye. Recently, he had shared a hilarious video of a vehicle he described as a “low cost car” fuelled by renewable energy.