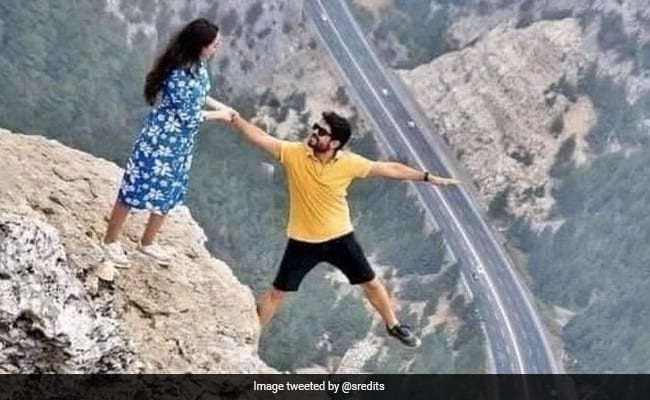 Latest: Couple Poses On Cliff’s Edge In Viral Pic That Has People Baffled

A couple was photographed posing on the edge of a cliff.

A picture of a couple posing on the edge of a cliff has generated a huge buzz on social media, with thousands of people debating whether the pic is real or the product of some clever Photoshop work. The pic shows a woman standing on the edge of what appears to be a tall cliff, holding the hand of a man who seems to be dangling mid-air off the cliff’s edge.

There appears to be nothing below them except for a road after a significant drop.

“What’s stopping you from doing this?” wrote a Twitter user while sharing the pic.

Whats stopping you from doing this? pic.twitter.com/XwSBJScSrU

Since being posted on the microblogging platform, the pic has garnered over 5,000 ‘likes’ and thousands of reactions. In the comments section, people wondered whether the pic was edited to make it look like a risky shot, or whether the couple was actually “foolish” enough to pose on the edge of a cliff.

Many said that “common sense” and “no time to Photoshop” were some of the factors stopping them from posing like the couple.

My love for my soulmate apart from common sense.

However, a section of the Internet countered these arguments, saying that the photo looked dangerous only due to the angle of the camera.

People identified the location of the photograph as Gulek Castle in Turkey. This medieval castle in Mersin, at an altitude of 5,020 feet above sea level, has become a popular spot with tourists thanks to the opportunities for photography it offers.

Many Twitter users shared a zoomed-out shot of the cliff which makes it clear that instead of a sharp drop, there is actually land beneath the cliff. When a shot is framed cleverly, it makes it look like there is nothing below the cliff.

All about the angle ???? Reality check! pic.twitter.com/Uu27GEdcKX

We don’t know about the location pic.twitter.com/gVHQI6cIy8