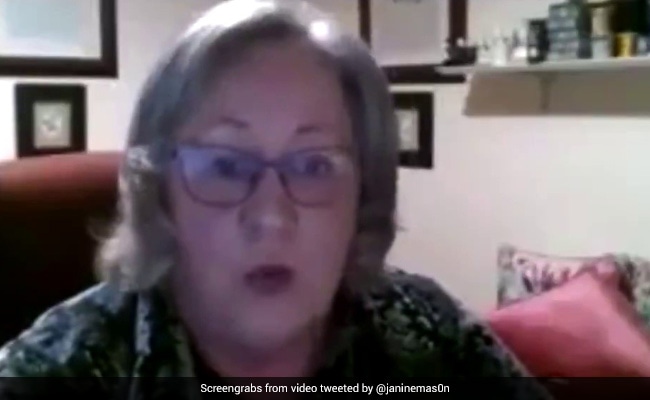 Jackie Weaver became an unlikely Internet star, thanks to a chaotic Zoom meeting.

A meeting between members of the Handforth Parish Council in UK has gone viral after descending into chaos. A recording of the hilarious Zoom call has been viewed over 3 million times on social media. The footage shows members of the council trading insults, people being booted off the call, tempers flaring and hysterical laughter – all in the space of a few minutes.

According to BBC, the Zoom meeting actually took place on December 10, but footage went viral only earlier this week after it was posted on YouTube and Twitter.

The recording shows chairman Brian Tolver refusing to recognise the legitimacy of the meeting and labelling himself a “clerk” – prompting Jackie Weaver, from the Cheshire Association of Local Councils, to say “There is no way of stopping him from calling himself clerk. Please refer to me as Britney Spears from now on.”

Mr Tolver hit back at Ms Weaver with an angry rant that led to him being removed from the meeting. “You have no authority here Jackie Weaver!” he was seen shouting – words that were quickly picked up and turned into a meme by Twitter users.

i’ve never missed in person meetings more than i did watching this parish council meeting descend into chaos pic.twitter.com/I75zi1fIK5

Mr Tolver was removed from the meeting for acting in a “disruptive and aggressive” manner and placed into a virtual waiting room, reports Cheshire Live.

The removal caused Councillor Aled Brewerton to shout at Ms Weaver, saying: “Read the standing orders – read them and understand them!”

Another parish council member’s request for “civility” was met with hysterical laughter.

Snippets from the chaotic meeting have amused millions of social media users and prompted a flurry of memes on the microblogging platform Twitter.

Why do the villains always get the best lines? pic.twitter.com/mdkUc9QJOm

Jackie Weaver as her mouse hovers over the room attendees list pic.twitter.com/IRWPHKt1B3