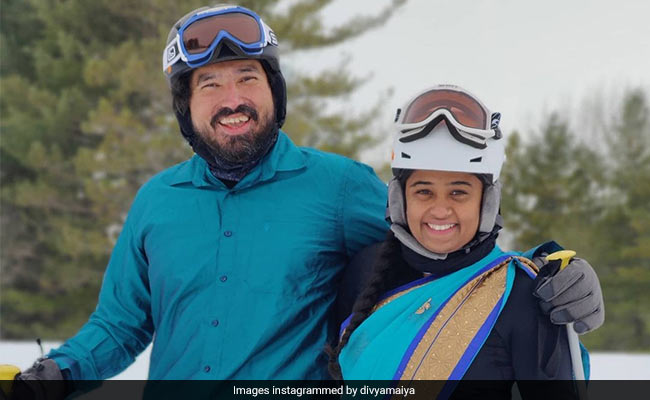 After bhangra in sub-zero temperatures, it is skiing in a saree that is winning the Internet. Recently, a couple in the US decided to go skiing in traditional Indian outfits. Divya and Madhu have wowed the Internet with their unusual choice of garments. While she wore a blue saree over leggings and a pullover, he donned a dhoti before hitting the slopes.

Videos of Divya and Madhu have impressed thousands of people on social media. Although the videos were shared by Divya on Instagram late last month, they only captured the Internet’s attention recently.

The videos show the couple pairing their gear with traditional Indian clothes while skiing on the slopes of Welch Village – a ski area in Minnesota. Undeterred by their unique skiing outfits, they were seen going down the snow-covered slopes of the resort with practiced ease.

“We needed to do something really crazy today to distract ourselves!” wrote Divya while sharing the footage on Instagram.

The video has racked up over 25,000 ‘likes’ and hundreds of impressed comments.

“Love this. Saree and panache game strong,” wrote one person in the comments section.

“Wow! Seriously impressive. How did you learn to ski like that?” another asked.

This is not the first time that videos of people performing impressive stunts while wearing sarees have gone viral. Recently, a bride in Chennai wore a red saree for a unique underwater wedding ceremony. Before that, videos of a gymnast performing jaw-dropping flips and cartwheels in a saree had also wowed the Internet.

Latest: At 17, Elon Musk Had To Be Retested For Computer...

Latest: At 17, Elon Musk Had To Be Retested For Computer...