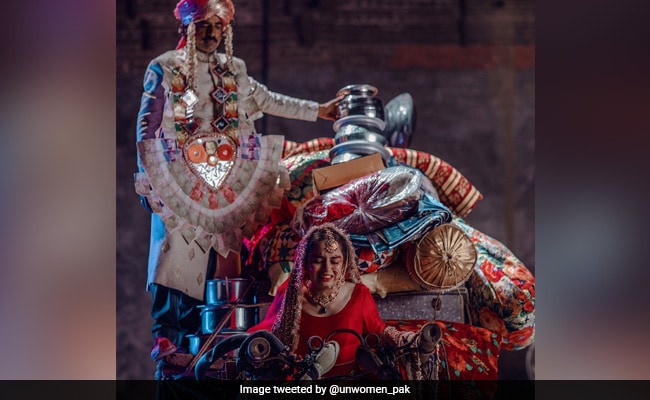 The United Nations Entity for Gender Equality and the Empowerment of Women Pakistan has lent its support to celebrated designer Ali Xeeshan’s fashion campaign against dowry – but not all on social media are happy with the collaboration. According to news website Daily Pakistan, Mr Xeeshan’s latest collection ‘Numaish’ highlights the bitter reality of the age-old practice of dowry while urging people to take a pledge against it. The collection was showcased at the ‘Pantene HUM Bridal Couture Week 2021’ and developed in collaboration with UN Women Pakistan.

“UN Women Pakistan supports NUMAISH – a pledge against dowry by @ALIXEESHAN,” the organisation tweeted, sharing striking photos that aim to highlight the burden of dowry.

UN Women Pakistan supports NUMAISH – a pledge against dowry by @ALIXEESHAN.
Share this powerful message and join us to #StopDowryMongering#NumaishNaLagao#JahezkhoriBandKaro@UN_Women@unwomenasiapic.twitter.com/4RCXWpkB9f

While several people applauded the collaboration and the social message behind it, some criticised the fashion designer saying that his campaign against dowry while selling expensive clothes represented nothing but hypocrisy on his part.

Great message. But capitalism remains undefeated. Whereas designer #AliZeeshan has put forth an applaudable message, but his very bridal dresses cost an arm and leg to the same bride’s family. 1 designer dress costs as much as the entire dowry. #SayNoToDowry#CapitalismThriveshttps://t.co/U5jyJp3YPe

Then tell them to lower their rates#NumaishNaLagao#JahezkhoriBandKaro#SayNoToDowry@ALIXEESHAN@unwomen_pakhttps://t.co/eyus7a1XJ3pic.twitter.com/LTGifVV0nB

Some felt that anyone involved in the opulent wedding business of Pakistan had no right to criticise the culture of dowry. Many also pointed out that just like dowry, the burden of buying expensive wedding clothes also fell on the bride’s family and blamed the fashion designer for being complicit in regressive practices.

main expense of marriage is anyway the bridal/groom dress n marriage cermony which cost from as low as 5 lakh .by bride father

However, many on Twitter applauded the campaign, saying that it used outstanding visuals to impart an important message.

This picture is so powerful, the dowry mongering needs to end!

It hurts my heart how the family of a girl starts saving for dowry the moment a girl is born in a household, and ends up broke ????#StopDowryMongering#NumaishnaLagao#DowryFreePakistanhttps://t.co/ucrnlV8jU6

What an art! What an expression! What a meaningful message! #SayNoToDowry#SpreadTheWordhttps://t.co/qx4eHUisJk

According to Mr Xeeshan, Numaish aims to shed light on the “epochal and alarming issue of families fretting over saving money for their daughters’ dowry (Jahez) instead of their education.”