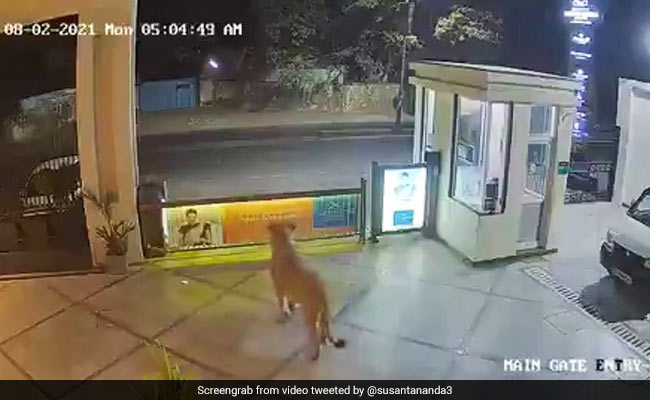 Latest: Lion Enters Hotel In Gujarat By Leaping Over Wall

A lion enters a hotel in Junagadh, Gujarat.

Shocking CCTV footage shows the moment a lion checked into a hotel in Gujarat. Surveillance camera footage from a hotel in Junagadh shows the lion leaping over a low boundary wall to enter the hotel premises in the early hours of Monday morning.

The footage was shared on Twitter by Twitter user Udayan Kachchhi, who wrote that lions had become a regular feature in the city of Junagadh. Located at the foot of the Girnar Hills, Junagadh is close to the Gir Lion Sanctuary – the last abode of the Asiatic lion in the world.

Mr Kachchhi said the video was filmed at Hotel Sarovar Portico in Junagadh, which is located in a busy part of the city, right opposite the railway station.

CCTV footage of the lion at the hotel was reposted on Twitter by Indian Forest Service officer Susanta Nanda, who remarked upon the increasing instances of human-animal conflict in the state.

“It didn’t bother the security to open the gate even… Time to shift some of them to a new home to avoid negative interface,” wrote Mr Nanda while sharing the clip. In the video, the big cat jumps over the wall shortly before a motorcyclist crosses the road. Watch it below:

It didn’t bother the security to open the gate even…
Time to shift some of them to a new home to avoid negative interface. pic.twitter.com/ElWodIvyfs

The video has been viewed nearly 7,000 times on the microblogging platform, where it has also received a number of shocked reactions.

Read 50% of lion population live outside of protected areas in Gujarat. This risks both human and lion lives. They should be relocated to other places.

Cats are territorial. They go back to their old homes when you move house. Make it a crime to build real estate around a margin of protected areas.

In other videos, the lion can be seen entering the property and exploring the parking area. Luckily, the hotel seemed empty in the early hours of the morning.

In 2019, a pride of seven lions was found roaming the streets of Junagadh.