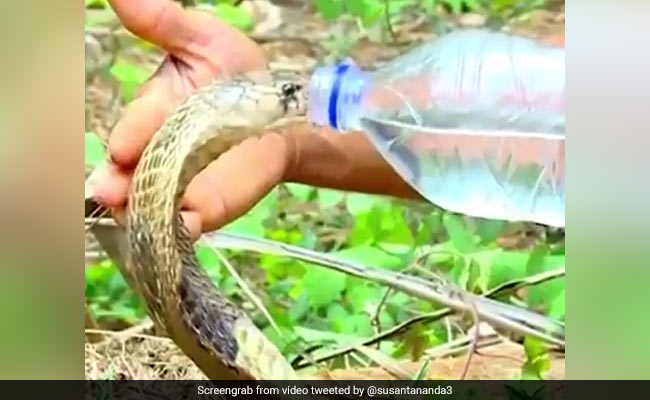 An old video shows a man squatting in front of a snake to offer it water.

The incredible sight of a man offering water to a cobra has gone viral on Twitter again, almost three years after it first surfaced online. The old video saw a spike in popularity again this afternoon after it was shared on the microblogging platform by Indian Forest Service officer Susanta Nanda.

In the short clip, the man – reportedly a forest official – is seen squatting in front of the snake with a plastic water bottle in his hand. He gently tips the bottle forward towards the cobra. Evidently thirsty, the snake laps up the water quickly.

“Love & water… Two best ingredients of life,” wrote IFS Susanta Nanda while sharing the clip on Twitter. Watch it below:

The video has been viewed nearly 9,000 times on the microblogging platform, collecting a ton of amazed comments.

Many Twitter users praised the forest official for showing immense courage and compassion in getting close to a venomous snake to help it out.

“Courage and Compassion in action,” wrote one Twitter user.

Some felt that the video should have come with a note warning people not to get close to snakes unless they are trained to handle them safely.

This is not the first time that a video of a snake drinking water from a bottle has captured social media’s attention. In 2017, a thirsty king cobra found its way to the Kaiga village in Karnataka, where a wildlife rescue worker offered some water to it, which it lapped up quickly.

Latest: Japan’s Tsunami Survivors Call Lost Loves On The Phone Of The Wind