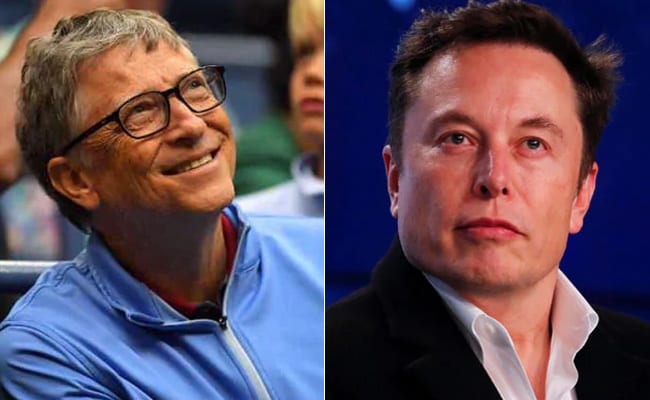 Latest: Unlike Elon Musk, Bill Gates Is “Not A Mars Person”. Here’s What He Said

“Underestimating Elon is not a good idea,” said Bill Gates.

Bill Gates and Elon Musk have a famously complicated relationship, but the Microsoft co-founder admits that underestimating Elon Musk is “not a good idea.” Mr Gates recently told New York Times opinion writer Kara Swisher on her ‘Sway’ podcast that Elon Musk’s electric car company Tesla has done a lot for climate change. He also added that unlike Mr Musk, he himself was not a “Mars person” and did not think of rockets as a solution.

“Well, it’s important to say that what Elon did with Tesla is one of the greatest contributions to climate change anyone’s ever made,” said Mr Gates. “And you know, underestimating Elon is not a good idea.”

However, the Microsoft co-founder, who is currently worth more than $130 billion according to the Bloomberg Billionaires Index, added that while Tesla was doing great work on “easy stuff, like passenger cars”, tackling climate change would require focus on other industries.

“We’re basically not doing enough on the hard stuff: steel, cement, meat,” he said, according to CNBC. “And sadly, the things people think about – the electricity, passenger cars – are a third of the problem. So we have to work on the two-thirds. And if all you pay attention to is those short-term metrics, not the green premiums across the board, then you miss out on what is the longest lead time, which is the hard stuff.”

Mr Gates’ comments came after Elon Musk’s appearance on Joe Rogan’s podcast, where he was dismissive of the Microsoft co-founder’s knowledge of electric vehicles. “He didn’t know what he was talking about,” Elon Musk said when asked to react to Mr Gates’ comments about electric vehicles not being good enough to carry heavy cargo over long distances, according to Electrek.

During his appearance on Ms Swisher’s Sway podcast, Bill Gates added that unlike Elon Musk, he was not interested in travelling to space. He said that he was “not a Mars person” and would rather spend his money on providing vaccines through his foundation.

“I’m not going to pay a lot of money because my foundation can buy measles vaccines and save a life for $1,000. So anything I do, I always think, OK, I could spend that $1,000 buying measles vaccine,” said Bill Gates. His stand on the subject is in direct contrast to Elon Musk’s, who has repeatedly spoken about sending humans to Mars.

“About half my money is intended to help problems on Earth & half to help establish a self-sustaining city on Mars to ensure continuation of life (of all species) in case Earth gets hit by a meteor like the dinosaurs or WW3 happens & we destroy ourselves,” he said in a tweet from 2018 – a pledge he reiterated in December when he said “I want to be able to contribute as much as possible to the city on Mars.”

Last year, Elon Musk had taken a dig at Bill Gates for buying a Porsche instead of a Tesla.