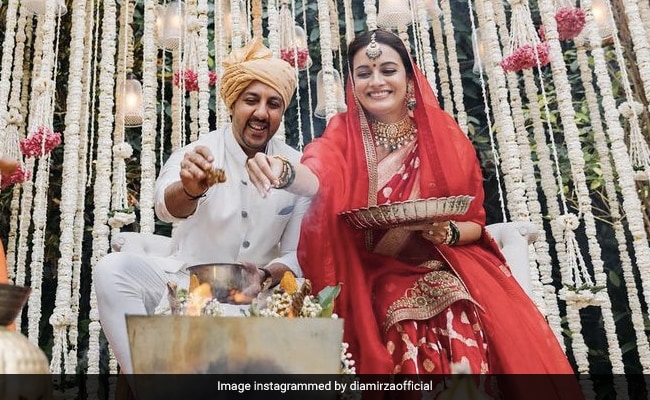 Latest: Dia Mirza Said No To Kanyadaan And Bidaai At Her Wedding Because….

Dia Mirza shared a glimpse from her wedding ceremony on Instagram.

Actress Dia Mirza, who married businessman Vaibhav Rekhi on February 15, revealed in an Instagram post this morning that the couple chose to forgo the traditional rituals of Kanyadaan and Bidaai because “change begins with choice.” Dia Mirza turned traditional rituals on their head at her wedding – her Vedic wedding ceremony was conducted by a woman priest, Sheela Atta. In her post, the 39-year-old actress said that it was “time for women to own their own agency” and to redefine what is old.

Kanyadaan is a ritual that symbolises the father ‘giving his daughter’ away to her husband, while Bidaai marks the departure of the bride from her father’s home to her husband’s.

“The highest point for us was the Vedic ceremony conducted by a woman priest!” wrote Dia Mirza in her Instagram post, sharing a glimpse from the ceremony.

She revealed that she had never seen a woman priest conduct a wedding ceremony until she attended her friend Ananya’s wedding. “Ananya’s wedding gift to Vaibhav and me was to bring Sheela Atta who is her aunt and also a priestess, to perform the ceremony for us,” she wrote.

“It is a woman’s soul that contains love, wonder, benediction, magical energy, tenderness and deep empathy for all that lives. It is time for women to own their own agency, their divinity, their power and to redefine what is old and birth what is new,” wrote Dia Mirza.

In her post, the actress and UN Environment Goodwill Ambassador said that it was a privilege to be married by a woman priest and that she hoped other couples would make the choice too.

She concluded her post by writing: “Also, we said NO to ‘Kanyadaan‘ and ‘Bidaai‘ change begins with choice doesn’t it?”. Dia Mirza also added the hashtag #GenerationEquality, which is used by UN Women for its Generation Equality campaign to realise women’s rights for an equal future.

“Absolutely support no Kanyadaan and Bidaai. More power to you Dia,” wrote one person in the comments section.

“No to Kanyadaan and Bidai. This is amazing,” another said.

Dia Mirza and Vaibhav Rekhi’s wedding was an intimate affair with only a handful of friends and family members in attendance. She had earlier shared glimpses from the Varmala and Phera ceremonies.

Dia Mirza, who is vocal in her support of environmental causes, said in her Instagram post this morning that the wedding ceremony was organised in a “completely sustainable” manner with no plastic waste.

The Sanju actress yesterday also gave a shout-out to Sheela Atta, the woman priest who conducted her wedding ceremony.