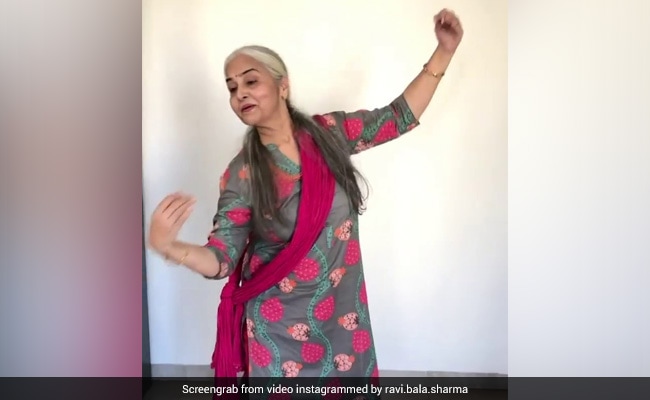 Latest: Dadi, 62, Has Killer Dance Moves; Diljit Dosanjh And Others Blown Away

Ravi Bala Sharma, 62, is fondly known as “Dancing Dadi” to her fans.

Ravi Bala Sharma proves that age is just a number. At 62, she is taking the Internet by storm with her dance videos and has a following of over 1 lakh on Instagram, where she is fondly known as “Dancing Dadi” to her fans. Ms Sharma can proudly count celebrities like Diljit Dosanjh and Imtiaz Ali among her many fans today.

“I was fond of dancing since childhood and would lock myself up in my room and dance whenever I got the opportunity,” she told NDTV. After her marriage, however, Ms Sharma’s passion for dance took a backseat to family responsibilities.

“After college I got married and as household and other responsibilities increased, my dancing stopped,” she said. But when her husband died after 27 years of marriage, the loss was unbearable for Ms Sharma.

“After my husband passed away I went into depression,” she said. Her family that encouraged her to take up dancing again, reminding her that it was her husband’s dream to see her dance.

Ravi Bala Sharma’s sister took her to an audition for a dance competition. She later posted a video of the audition on social media, where it received a lot of love and praise.

“My audition dance on Waheedaji’s song went viral when I posted it on social media and I got such nice comments that I couldn’t stop posting more dance videos,” she said.

Her fame grew from there and Ms Sharma quickly gained a strong following on social media with her dance videos. Celebrities like singer Diljit Dosanjh, filmmaker Imtiaz Ali and choreographer Terence Lewis shared and liked her videos on their social media handles.

Diljit Dosanjh shared her video on his own Instagram.

The video racked up nearly 6 lakh views on the photo and video sharing platform, and helped propel Ms Sharma to viral Internet fame.

Talking about the love and appreciation she has received on social media, Ms Sharma told NDTV: “I had never imagined that something like this will happen and my dream will come true at this age. I just posted my videos and everyone liked them.”

She hopes that her story will inspire others to pursue their passions, irrespective of age.

“If you are aged don’t think this is it, and that you cant do anything,” she advises. “I’m 62 years of age and am following my passion and everyone should do it .”