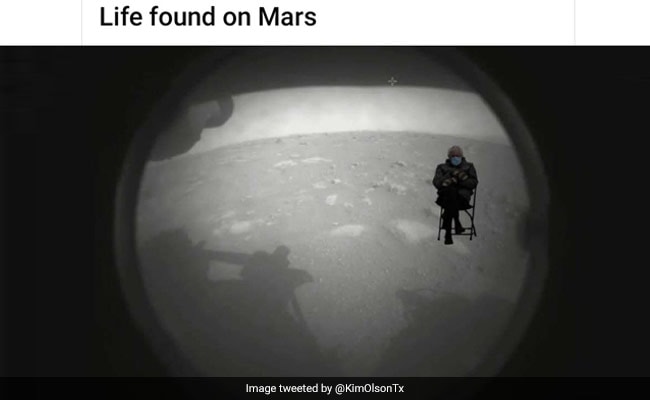 Bernie Sander was beamed to the surface of Mars in Twitter’s meme fest.

After seven months in space, NASA’s Perseverance rover landed on the surface of Mars on Thursday. NASA’s Mars rover Perseverance, the most advanced astrobiology lab ever sent to another world, landed safely in a vast crater in its first stop on a search for traces of ancient microbial life on the Red Planet. The official Twitter account of NASA’s Perseverance Mars Rover shared a black and white photo of the planet’s surface. “Hello, world. My first look at my forever home,” the tweet read

Hello, world. My first look at my forever home. #CountdownToMarspic.twitter.com/dkM9jE9I6X

It was followed by another image of the Jezero Crater – the site of a long-vanished Martian lake bed in which the rover landed.

And another look behind me. Welcome to Jezero Crater. #CountdownToMarspic.twitter.com/dbU3dhm6VZ

It did not take long for netizens to begin creating memes out of the moment. Take a look at some of the funny jokes and memes that NASA’s Perseverance rover landing on Mars inspired:

How is nobody talking about this #Mars2020 picture?? pic.twitter.com/b8cBcWXmdp

First image back from mars pic.twitter.com/65yIFrOx4D

Over the course of several years, Perseverance will collect samples that will be sent back to Earth for lab analysis. Scientists hope to find biosignatures embedded in samples of ancient sediments that Perseverance is designed to extract from Martian rock. Two subsequent Mars missions are planned to retrieve the samples and return them to NASA in the next decade, in collaboration with the European Space Agency.

President Joe Biden, watching NASA coverage of the event at the White House, hailed the landing as “historic”.