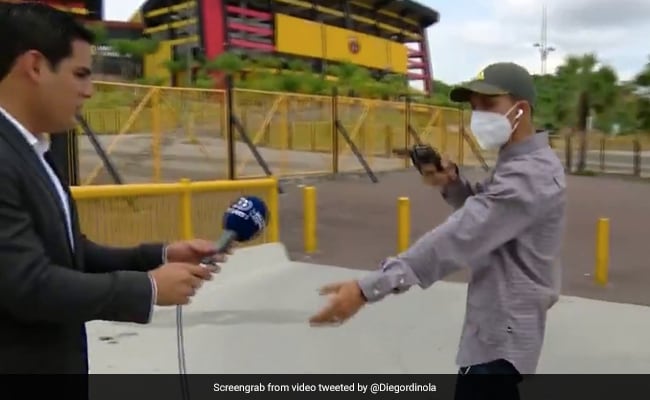 A gun-waving robber interrupted a news report in Ecuador.

A news reporter and TV crew were robbed at gunpoint during a live broadcast in Ecuador last Friday. Shocking footage that has gone viral on Twitter shows a gun-waving man demanding that the journalist and the TV crew hand their cash over to him.

According to Sky News, Ecuadorian sports journalist Diego Ordinola was reporting from outside the Estadio Monumental in the city of Guayaquil last week for DirecTV Sports when the robber interrupted them. He appeared wearing a face mask and pointed a revolver at Mr Ordinola’s face.

“Telephone!” the armed robber shouted before swiping at the journalist’s microphone.

He then pointed his gun at the cameraman and the crew, demanding that they hand over their wallets and phones.

The footage was recorded as the camera filming Mr Ordinola kept rolling. The news reporter later uploaded the video to Instagram.

“We can’t even work quietly, this happened at 1:00 PM today outside the Monumental Stadium,” he wrote.

According to Newsweek, the robber managed to escape with a phone he obtained from a crew member.

Meanwhile, footage of the incident has been viewed over 3.8 lakh times on the microblogging platform. The post was flooded with messages from well wishers as well as comments from people who criticised the incident as “shocking” and “reprehensible”.

Mr Ordinola has said that police have promised to find the robber.