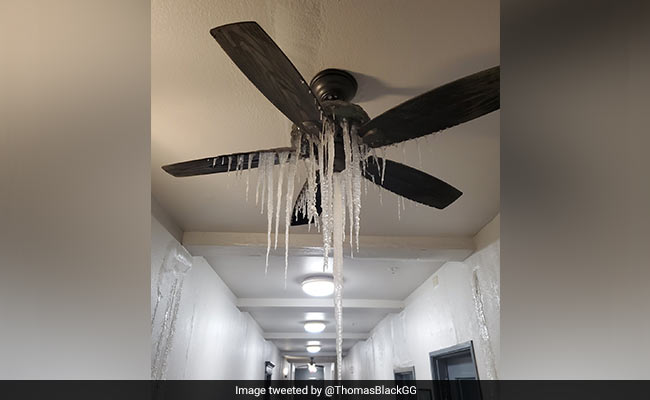 A severe winter storm engulfing Texas has produced some surreal images from the US state where millions are facing their fifth day without heat, food or access to water. Icicles forming on fans, snow-covered roads and water pouring out of houses: these are just a few of the many unreal scenes captured in the state which is facing a spell of historic cold weather. Freezing temperatures are expected to last through Saturday.

The Electric Reliability Council of Texas (ERCOT), a cooperative responsible for 90% of the state’s electricity, said on Thursday it made “significant progress” in restoring power without providing detailed figures. However, tens of thousands of households in the state are still without power and basic utilities, according to a Reuters report.

One Texas man made the best of the freezing temperatures by skiing down a snow-covered highway. Travis McGullam shared a Facebook video which shows him skiing on Interstate 10 in Houston.

A number of other people in Texas shared videos and photos that show how the state’s roads have been turned into ice rinks for ice skaters.

“This is how cold it is at my apartment,” a Texas resident tweeted earlier this week with a picture of icicles hanging from his fan.

This is how cold it is at my Apartment.

As a Texan, yes, I’m certainly not built for this. I don’t even care. pic.twitter.com/FMt8imglJp

While the icy conditions should gradually improve, record low temperatures will likely persist in the South Central region of the United States through Saturday, according to the National Weather Service, which said the storm was moving northeastward, dropping snow on a swath of states in its path.

Latest: Japan’s Tsunami Survivors Call Lost Loves On The Phone Of The Wind