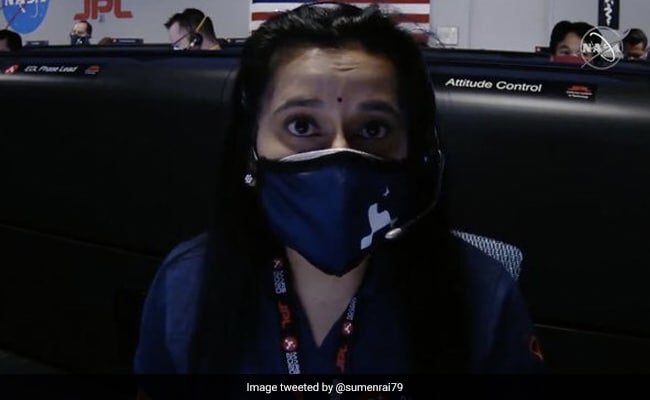 On Thursday, as NASA’s Perseverance rover made a successful landing on the Red Planet, it was Indian-American scientist Swati Mohan who led the guidance, navigation, and control operations of the Mars 2020 mission.

“Touchdown confirmed,” said operations lead Dr Swati Mohan at around 3:55 PM Eastern Time (2055 GMT), as mission control at NASA’s Jet Propulsion Laboratory in Pasadena erupted in cheers. A video of the moment, released by NASA, shows Dr Mohan wearing a small bindi on her forehead – a detail that was quickly picked up on and became a talking point on desi Twitter.

The parachute has been deployed! @NASAPersevere is on her way to complete her #CountdownToMars: pic.twitter.com/i29Wb4rYlo

Dr Mohan emigrated to the US from India when she was only a year old. Raised in Northern Virginia and Washington DC metro area, she completed her bachelor’s degree from Cornell University in Mechanical & Aerospace Engineering, and her M.S. and Ph.D from Massachusetts Institute of Technology (MIT) in Aeronautics/Astronautics.

The tiny bindi she wore generated a huge buzz on social media.

Many took to the microblogging platform to thank Dr Mohan for wearing a bindi, saying that they had been bullied for doing the same

I wore a bindi in elementary school until I was old enough to notice and feel self conscious about people’s comments. Admittedly, I still hesitate to post childhood pictures because of it. Swati Mohan’s made me smile 🙂 https://t.co/wfmeoYk0Of

listen.
i wore a bindi through primary school and got bullied, physically bullied, for it. this is doing all kinds of things to me. ????
swati mohan in mission control, thank you. #NASAPerseverance

Although her bindi captured most of the attention, less obvious was Dr Mohan’s braid – the Indian-origin scientist got her hair dyed blue for the occasion

EDL family voted and I drew the straw for dyeing my hair per their request for landing day. 7 hours to entry. Landing approximately at 12:55pm. At JPL and ready to go! pic.twitter.com/96n3U3NQEs

Over the course of her career with NASA, Dr Mohan has worked on the Cassini mission to Saturn and GRAIL — a pair of formation flown spacecraft to the Moon, and has been a mainstay with the Mars 2020 mission since its beginning in 2013.

She says her interest in space peaked after watching Star Trek at the age of nine – and it only increased when she took her first physics class.

“I was lucky enough to have a great teacher, and everything was so understandable and easy. That was when I really considered engineering, as a way to pursue space,” Dr Mohan said.

Commenting on her team’s role in the current mission, Dr Mohan said during the cruise phase heading toward Mars, their job is to figure out how the spacecraft is oriented, and make sure it is pointed correctly in space — “solar arrays to sun, antenna to Earth, and maneuver the spacecraft to get it where we want to go.”