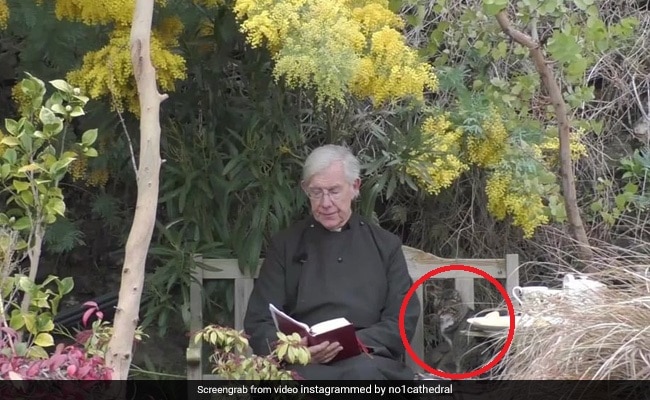 A cat steals a pancake during prayer service in Canterbury Cathedral

No longer content with stealing just milk, Tiger the cat has moved on to better, more delicious targets – like pancakes. The resident cats of Canterbury Cathedral in the UK have become something of social media stars, thanks to their hilarious antics. The cathedral has been broadcasting prayers online since the beginning of the coronavirus pandemic last year made social distancing and no-contact the new normal – and twice before the cathedral’s cats have gone viral for interrupting prayer services in the funniest of manners.

In the hilarious clip which was shared on Instagram, Tiger the cat was seen eyeing the plate of pancakes kept by the Dean’s side before grabbing one of the sweet treats.

“No longer content with stealing a sip of milk, during today’s Morning Prayer naughty Tiger set his sights on Dean Robert’s pancakes!” the Canterbury Cathedral wrote while sharing the clip on Instagram last week.

Since being posted on the photo and video sharing platform, the video has racked up thousands of views and a ton of amused comments.

“Well done naughty tiger. Enjoy your pancakes and milk,” wrote one person in the comments section.

“Made my morning,” another said.

In July last year, Tiger was filmed stealing milk during an online prayer service. Before that, one of his companions – a cat named Leo – upstaged the Dean by disappearing under his robes during a sermon in a video which became a viral hit on social media.