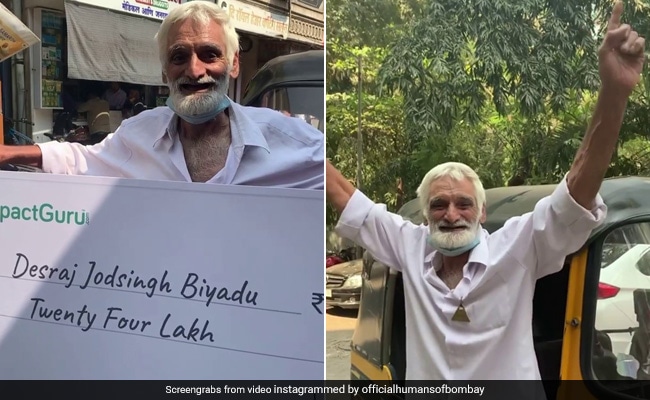 An auto driver in Mumbai has received lakhs in donations from across the world.

In a heartwarming development, the Mumbai auto driver who sold his house to fund his granddaughter’s education has received Rs 24 lakh in donations through a crowdfunding initiative. Mr Desraj went viral after his heart-wrenching story was shared on social media by ‘Humans of Bombay’. In his interview, Mr Desraj revealed that after the death of both his sons, the responsibility of taking care of the family fell on his ageing shoulders.

“It was the responsibility of my daughters-in-law and their four children that kept me going,” the grieving father revealed.

Mr Desraj began to work longer hours driving his autorickshaw to support his family. The majority of his earnings went into paying the school fee for his grandchildren – which he says was worth it when his granddaughter received 80 per cent in her Class 12 Board Exams.

But when his granddaughter said that she wanted to travel to Delhi for a B.Ed course, Mr Desraj knew he wouldn’t be able to afford it. So, he sold his house to fund her education. “I had to fulfill her dreams… at any cost. So, I sold our house and paid her fee,” he said.

The story of Mr Desraj’s selfless deed touched thousands of hearts after it was shared online. Offers of help poured in from all quarters. His story was also posted on Twitter by the Congress’s Archana Dalmia with an appeal to Mumbai residents to help the auto driver – the post was retweeted by Milind Deora as well.

A Facebook user named Gunjan Ratti started a fundraiser for Mr Desraj, which exceeded its goal of Rs 20 lakh.

Now, an update shared by Humans of Bombay has revealed that Mr Desraj received a cheque for Rs 24 lakh, thanks to the crowdfunding initiative.

The popular page shared a video on Monday which shows Mr Desraj receiving a cheque for Rs 24 lakh and thanking his supporters for the love they showered on him.

“The support Desraj ji has received is immense! Because you all went out of your way to help him, he now has a roof over his head, and will be able to educate his granddaughter!” Humans of Bombay wrote while sharing the video.

“Heartwarming,” wrote one person in the comments section.

“This makes me so happy. Thank you to everyone who helped him,” another said.