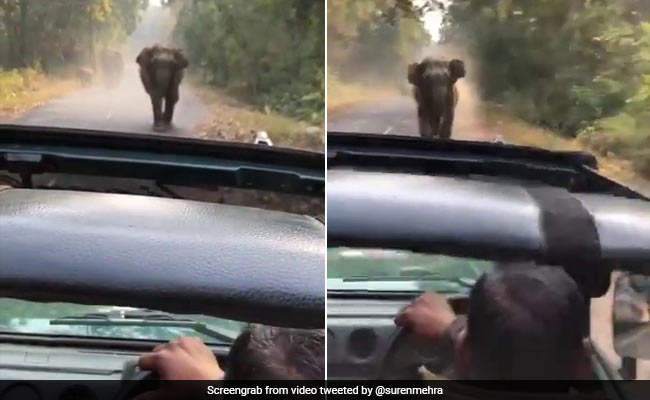 Hair-raising footage from an undisclosed location shows an elephant charging at a tourist vehicle while making loud trumpeting sounds. The footage has prompted warnings from wildlife officials who criticised the behaviour of the tourists as irresponsible. The video was shared on Twitter this Thursday by Indian Forest Service officer Surender Mehra.

“Arrey kuch nahi hoga, chill (Chill, nothing will happen),” a woman was heard saying in the clip, while another tourist encouraged her to film the elephant walking toward their vehicle. However, the elephant soon increased its speed and began running – prompting the tourists to speed up their car in order to make a quick exit. “Bhagao, bhagao, bhagao (faster, faster, faster),” one person in the group was heard saying as the huge animal began chasing the car while making loud noises.

Sharing the clip on Twitter, Mr Mehra asked everyone to respect wildlife and give animals the right of passage

अरे कुछ नहीं होगा, तुम विडीओ बनाओ….
How many times we feel the same, when we encounter wildlife, especially Elephants…????#SafetyFirst#RighttoPassage#RespectWildlifepic.twitter.com/MqdprC5UpO

The video has been watched over 6,000 times on the microblogging platform, where many criticised the tourists for provoking the wild animal instead of making a quiet exit.

Now these people will never forget the elephant trumpet ????

People don’t know that an angry elephant is more dangerous than a tiger or leopard and can injure or kill several.
One should never take any wild animal for granted, especially an elephant…..

Senior IFS officer Ramesh Pandey was among those who advised all tourists to maintain a safe distance from elephants. “Such incidents may be life risking. Elephants can run unexpectedly fast and easily catch a vehicle moving like this,” he wrote. “It’s advisable to keep a safe distance and not to take advantage of wild animals.”

Such incidents may be life risking. Elephants can run unexpectedly fast and easily catch a vehicle moving like this. It’s advisable to keep a safe distance and not to take advantage of wild animals. https://t.co/HaO1LPBVvd

IAS officer Supriya Sahu said that the incident illustrated a “sad reality” and highlighted the need to educate younger children about respecting wildlife.

Sad reality.???? We must start educating kids in all schools about the need to respect animals. Two Incubation centres are planned to be put up in schools at Nilgiris. Young generation is the only hope https://t.co/JtnMk7wioP

According to the Wildlife Trust of India, degradation of forest habitat and increased encroachment has resulted in increased human-elephant conflict. Over 400 humans are killed in encounters with elephants annually.