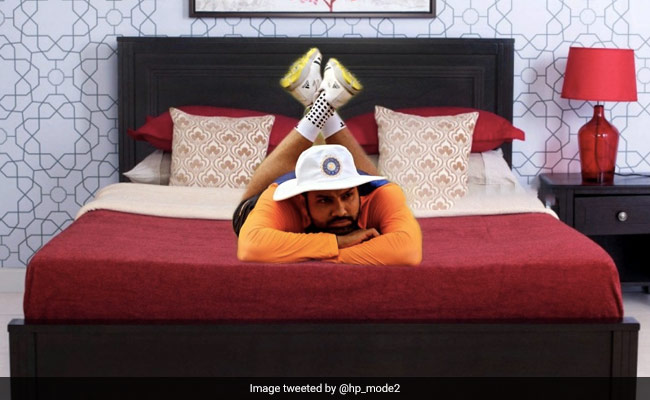 Rohit Sharma’s pic has been turned into a meme by Twitter users.

There has been a lot of discussion around how the pitch behaved at the newly-named Narendra Modi Stadium in Ahmedabad during the third Test match between India and England. Rohit Sharma was among those who shared their thoughts on the pitch, though he did it with a tongue-in-cheek Instagram post. Taking to the photo and video sharing platform on Monday, Rohit Sharma posted a photo of himself in training gear which has now been turned into a hilarious meme by Twitter users. “Wondering what would be the pitch like for 4th test,” the cricketer captioned the pic.

The pic shows Rohit Sharma lying on the ground, dressed in an orange T-shirt and a hat. Since being posted on Instagram, the photo has garnered 1.4 million ‘likes’ and nearly 10,000 amused comments – including one from his wife Ritika Sajdeh. “And you make fun of me for lazing around like this,” she posted in the comments section.

The “lazing around” pic has also inspired several memes on social media. Take a look at some of the funniest ones:

Me after putting my phone on charge : pic.twitter.com/RR56k06BPf

You waiting for your salary from beginning of month : pic.twitter.com/KGRRpl84ei

Much like what happened with the mega viral Bernie Sanders meme, Rohit Sharma is being Photoshopped into the weirdest of places

History Class is Going on

outside a stall, rohit spotted eagerly waiting for his vadapav pic.twitter.com/thxJkn9vsV

India won the third Test against England by 10 wickets. The win helped India take a 2-1 lead in the four-match series even as England lost their last chance to qualify for the World Test Championship (WTC) final.