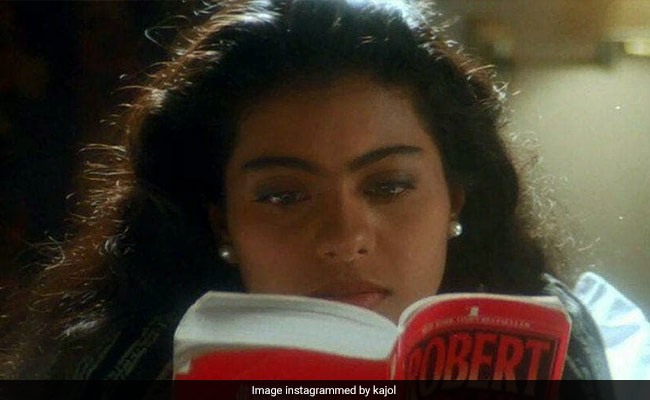 Kajol has always been a bookworm, and this time the actress took to Instagram in a bid to encourage others to read more while revealing one of her favourite words. Kajol shared a still from one of her movies on Instagram this evening which shows her reading a book by Robert Ludlum. In her caption, she used the hashtag #ReadMore and revealed her favourite word – one that is often (and incorrectly) cited as the longest word in the English language.

“One of my fav words ever… supercalifrangilisticexpialodocious…” wrote Kajol. She clarified that the word does not appear in the book she was seen reading in the pic from the 1998 movie Pyaar To Hona Hi Tha.

“LOL caption. And we thought DDLJ was a long title,” wrote one Instagram user. “This word is also one of my favs,” another remarked.

However, some noticed that the actress had spelled her favourite word incorrectly. “Can’t help spotting spelling mistakes,” one person wrote.

“My most favourite word and that I can spell it right,” said another, referring to a typo in Kajol’s spelling of “supercalifragilisticexpialidocious”.

If supercalifragilisticexpialidocious sounds familiar to you, it’s because the word was popularised by the 1964 musical film Mary Poppins. In the movie, the nanny Mary Poppins, played by the inimitable Julie Andrews, bursts into a song after winning a race.

“It’s supercalifragilisticexpialidocious,” she sings, describing it as “the biggest word you ever heard” – one that may sound “atrocious” but is sure to make you sound “precocious” when you say it.

In the movie, the word has no clear meaning. One of Mary Poppins’ charges describes it as “It’s something to say when you don’t know what to say.”

The Oxford English Dictionary, on the other hand, describes supercalifragilisticexpialidocious as “A nonsense word, originally used esp. by children, and typically expressing excited approbation.”