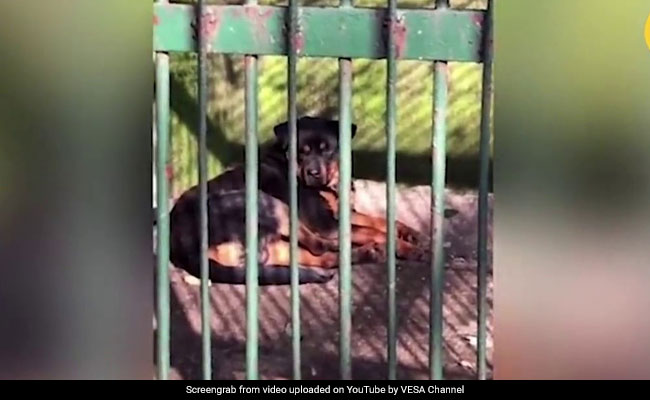 Latest: Chinese Zoo Tries To Pass Off Dog In Cage As Wolf

A zoo in China has raised eyebrows after putting a dog in an enclosure marked for wolves.

In a bizarre incident, a zoo in China was accused of trying to pass off a dog as a wolf. Footage that has gone viral on social media shows a visitor walking up to the enclosure marked ‘Wolf’ and reacting in surprise on seeing a dog inside.

According to BBC, the footage was filmed at central China’s Xiangwushan Zoo in Xianning, Hubei province.

In the short clip, the visitor walks up to the cage and spots a dog, which appears to be a Rottweiler, resting inside. “Woof! Are you a wolf?” he says to the animal.

The video has gone viral on Chinese social media platforms, racking up hundreds of amused comments. However, many people voiced their concern about zoo maintenance after an employee hinted that the zoo was struggling to stay afloat amid the coronavirus pandemic.

The zoo employee said that there had actually been a wolf in the enclosure, but it had died of old age. The dog, he said, was being kept there only temporarily, according to local reports.

The zoo charges 15 yuan or approximately Rs 168 for admission, but due to the coronavirus pandemic, it wasn’t seeing enough visitors.

This is not the first time that a zoo in China has tried to pass a dog off as another animal. In 2018, the Yuhe Zoo came under the scanner for putting a dog in the cage marked for Siberian tigers