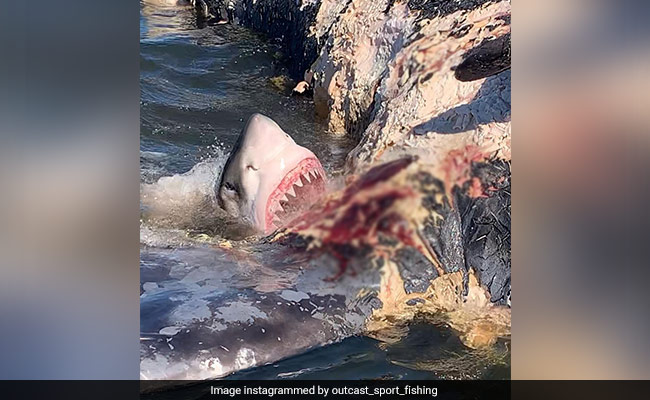 A fisherman has captured incredible footage of a great white shark devouring the carcass of a whale. Captain Chip Michalove, who runs expedition business Outcast Sport Fishing, heard that the carcass of a whale had been spotted off the coast of Myrtle Beach, South Carolina, reports Ladbible. Mr Michalove was so keen on seeing the North Atlantic right whale that he and his crew waited for days for the right kind of weather to set sailing. When a window opened up last Thursday, they set off a 3 AM – and their efforts were rewarded when they managed to catch a great white shark in the middle of a feeding frenzy.

“The thought of witnessing a circus kept us motivated. And it was everything we were hoping, it was hard to leave,” he told Newsweek.

Mr Michalove shared a dramatic video of a great white shark devouring the whale carcass on Instagram yesterday. “Whether the sun was up or down, these giants were inhaling it. And it’s STILL going on tonight,” he wrote, adding that he was hoping to go back to the scene once more.

Over the last week, he also shared several other videos and photos of the great white sharks feeding on the whale.

Mr Michalove told Newsweek that it had been a “conveyor belt of large great whites” that kept coming to the whale as he and his crew watched from a distance.

“I feel bad for the whale, I know there’s a lot of interest in their survival, but I couldn’t help but take advantage of the situation,” he said. “There’s no question if the opportunity came up again I would drop anything in the world to witness it.”

The North Atlantic right whale is one of the world’s most endangered large whale species. America’s National Oceanic and Atmospheric Administration estimates that less than 400 individuals of the species are alive today.