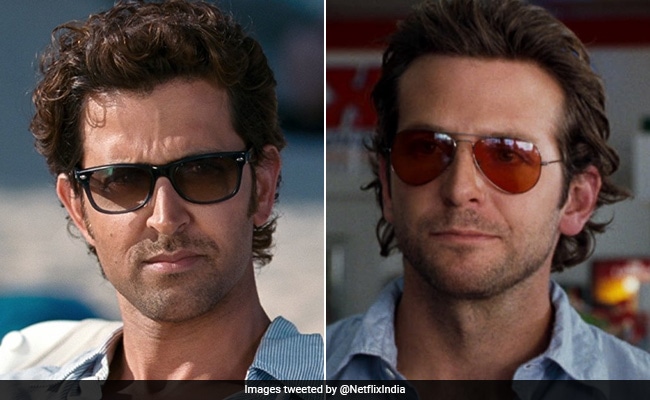 Latest: Ever Seen These Hollywood-Bollywood Stars In The Same Room? No? Hmm…

Do you think Hrithik Roshan and Bradley Cooper resemble each other?

Bollywood star Hrithik Roshan and Hollywood heartthrob Bradley Cooper have never been seen in the same room together. Pretty suspicious, if you ask Netflix India. The streaming giant jokingly fueled conspiracy theories that the two actors are, in fact, one and the same person with a hilarious Twitter thread this morning.

This morning, the official Twitter handle of Netflix India posted a series of photographs featuring Bollywood actors with their lookalikes from Hollywood. While Hrithik Roshan and Bradley Cooper were first on the list, Netflix also included other two other Indian actors who have lookalikes in Hollywood.

“All we’re saying is that we’ve never seen the two of them together in the same room,” wrote Netflix India while sharing the side-by-side comparison pics of Bradley Cooper and Hrithik Roshan. In screenshots from The Hangover and Zindagi Na Milegi Dobara, the resemblance between the two is uncanny.

All we’re saying is that we’ve never seen the two of them together in the same room. pic.twitter.com/cMDzk1ET1t

Surprised? Wait until you see Bobby Deol’s pic placed next to Joe Lo Truglio aka Charles Boyle from the hit sitcom Brooklyn Nine-Nine. The two, as Netflix helpfully pointed out, have also never been seen in the same room together.

Come to think of it, we haven’t seen them together either. pic.twitter.com/DpmXLb1Agz

And speaking of lookalikes, Netflix did not forget Jim Sarbh and Sacha Baron Cohen.

The Twitter thread has amused many, racking up over 2,000 ‘likes’ and a ton of comments.

But can Bradley Cooper do this? pic.twitter.com/FGlMU2WBWr

Many even shared other Hollywood-Bollywood lookalikes that Netflix could include in the thread: