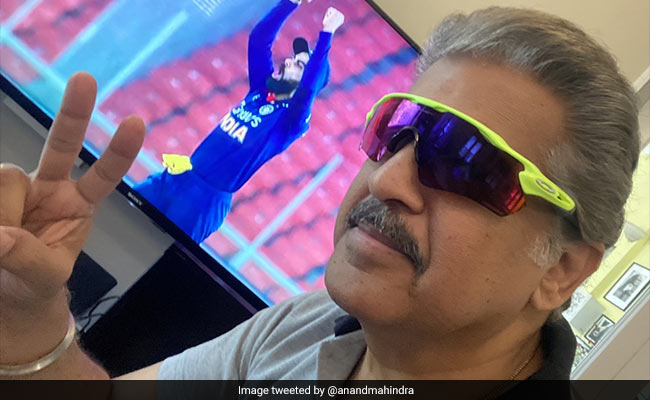 Anand Mahindra is an active Twitter user, but rarely does the Chairman of Mahindra Group share his own pictures on social media. On Sunday, however, Mr Mahindra posted a rare selfie which shows him wearing sunglasses, or, as he calls them, his “Axar shades”. In doing so, the industrialist fulfilled a promise he had made to a fan.

It all started on March 6, when Anand Mahindra shared a tweet applauding the Indian cricket team for their impressive win over England in the fourth Test at Ahmedabad. In his tweet, he shared a picture of Axar Patel — whose standout performance helped win the match — wearing white-framed sunglasses. “I need to get these sunglasses to commemorate the victory,” Mr Mahindra wrote.

He managed to procure the shades soon enough, and wore them while watching the second T20 international match between India and England at his Mumbai home. Mr Mahindra said he knew he didn’t need shades indoors, but was hopeful that they would act as a good luck charm.

When one of his followers requested that he share a picture of himself wearing the Axar shades, Mr Mahindra promised he would do so – provided India win the T20 series against England.

This Sunday, as India defeated England by 36 runs in the fifth Twenty20 International to claim the series, Mr Mahindra kept his promise and shared a picture of himself wearing the good luck sunglasses.

“OK, have to fulfill a commitment. Here’s the promised selfie with my ‘Axar’ shades…My new good luck charm that’s proven its worth,” he wrote.

OK, have to fulfill a commitment. Here’s the promised selfie with my “Axar” shades…My new good luck charm that’s proven its worth…???? pic.twitter.com/VdLSMCNkrs

“Never seen any industrialist being soo cool on social media,” wrote one Twitter user in the comments section.

“Wow… What a winning look…” another said.

Anand Mahindra had also shared a picture of himself in February last year. While travelling to Narmada in Gujarat, he made a pit stop at the Statue of Unity in Kevadiya and shared a picture with the world’s tallest statue.