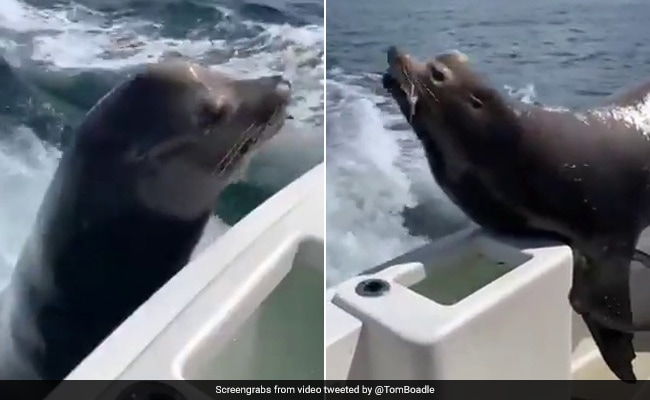 A sea lion was filmed climbing up a boat in this viral video.

Videos displaying animals have never failed to entertain us. One such clip was recently shared on Twitter. Through the caption, the user urged viewers to watch it till the end, and yes it was worth it.

The video features a man trying to feed some birds from a boat. But in a surprising turn of events, a wild, free and majestic guest comes out of the water to give a rare appearance. The bird-feeding session was interrupted by none other than a sea lion, who clambered up the boat.

???? An absolutely outstanding performance. Worth watching to the end. pic.twitter.com/784GSCJUvh

People couldn’t stop commenting and fawning over the creature. The adorable video, shared on Twitter, has garnered 9.8 million views till now and continues to be enjoyed by many.

This is so great. Poor thing will have a tummy ache though

Some were even concerned about the sea lion eating food that was meant for birds. “This is so great. Poor thing will have a tummy ache though,” read a comment.

Hahaha! Hope, no animal was hurt during the filming, apart from the poor fish, of course. The sea lion could’ve finished with indigestion having gobbled the lot?

Another concerned user said, “Hahaha! Hope, no animal was hurt during the filming, apart from the poor fish, of course. The sea lion could have finished with indigestion having gobbled the lot?”

They eat much more than that when they hunt on their own. ???? That was just easy.

While some comments were exceptionally hilarious and delved on the lighter side. A user felt that the scene was similar to the first day when pubs would open.

@davemacladd@claire22452675@jonnycaribouthe@stimmo@DeepakNambisan@rickynow@PhysTeacha@mrsLHK79 I think that’s more like the first day when the pubs open. ????????

A few users got a little more creative and shared GIFs.

In 2017, a video of a hungry sea lion hitching a ride on a boat had gone viral online.